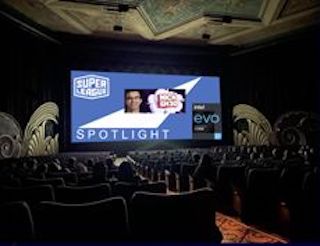 Super League and Screenvision’s Super League Spotlight series presents top highlights from the live stream broadcasts of popular gaming influencers within Super League’s established Core Gamer and Young Gamer networks, featuring several of the most well-known game titles in the world. With an average two-minute run time, each episode of Spotlight amplifies the best and most exciting in-game moments of the past month.

This original Super League content series serves as part of the growing partnership between Screenvision and Super League, working together to give brands cross-channel opportunities to reach young adult cord-cutters with gaming-related content both in-theatre and at home. Audiences in movie theatres across the country will have a front row seat to all the competitive action on the big screen, viewing the best in engaging gameplay that Super League has to offer. Hyundai will serve as the initial series sponsor as part of a year-long partnership with Super League.

“Super League Spotlight represents an exciting extension of the partnership we have been building with Screenvision Media for the past year,” said Nina Kammer, head of national sales for Super League. “Screenvision partners have been able to access key audiences of gamers within live streams via Super League through ad-blocker-proof digital video inventory, and together, we can now provide brands with another scalable avenue to reach desirable audiences in a high-impact, immersive environment full of teens and young adults. It was a natural opportunity to bring to Hyundai, one of our most important, long-term strategic brand partners. We are grateful for their enthusiastic suppor.!”

“Screenvision’s partnership with Super League Gaming reflects the powerful connection between the moviegoer and live stream gamer, both of which skew younger and are typically a more elusive audience, the cord-cutters and cord-nevers,” said Christine Martino, Screenvision’s executive vice president of national ad sales. “Super League Spotlight offers another engaging vehicle for advertisers to organically become part of the immersive cinema experience.”

"Our sponsorship of the Spotlight series is a great way to reach new audiences that might not be familiar with the Hyundai brand and our vehicles,” said Angela Zepeda, CMO, Hyundai Motor America. “The series is also exposing the fast-growing gaming industry to more people and helping elevate the entire community.”

The first edition of Super League Spotlight is in theatres now, just in time for the holiday season, with additional episodes featuring new content and highlights scheduled to roll out in 2022.