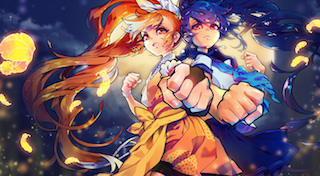 Screenvision Media, in association with Kaos Connect has announced an exclusive alliance with Crunchyroll to deliver quarterly anime event cinema programs in 2017. Anime Movie Night, presented by Crunchyroll, will feature some of the most popular anime titles, both new and classic.

Each theatrical event will feature select anime episodes or full-length theatrical releases, giving fans the opportunity to watch anime that is larger than life. Anime Movie Night will also include behind-the-scenes content about featured titles and the production of them. The first event will premiere April 2017, to be followed by at least three additional events, one per quarter, for the remainder of the year.

“As demand for anime continues to grow in the U.S. and around the world, it’s a thrill to have the opportunity to bring the latest hits, as well as the anime that fans know and love, into theaters, often for the very first time. We want to create new ways for fans to come together and share the experience of the content they love, and cinema is the perfect medium,” said Kun Gao, general manager of Crunchyroll. “Screenvision Media and Kaos Connect have been the perfect partners for the debut of Anime Movie Night based on their respective strongholds in the impactful arena of cinema.”

Crunchyroll currently delivers over 25,000 episodes and 15,000 hours of officially licensed content from leading Japanese media producers directly to viewers. Translated professionally in multiple languages, content is available within minutes of Japan TV broadcast through Crunchyroll’s apps, which live on every major mobile, connected TV, and gaming device, as well as the web.

“Anime fans continue to be among the most passionate supporters of Event Cinema,” said Dan Diamond and Shelly Maxwell, Kaos Connect’s managing partners. “Through our powerful alliance with Crunchyroll, these loyal fans will now be able to experience an ongoing series of the world’s best and most sought-after anime content, all in the comfort of their local movie theatres.”

“We’re so excited to extend the power of event cinema into the dynamic world of anime,” said Bernadette McCabe, senior vice president, business strategy, Screenvision Media. “The exclusive anime content Crunchyroll and Kaos Connect have created for Anime Movie Night is truly incredible, and we can’t wait to see the impact it has on the national anime fan base through the 40-foot-screen.”