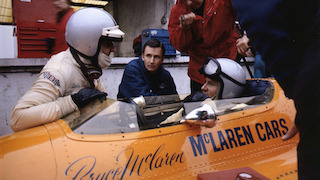 Screenvision Media, in partnership with Gunpowder & Sky, will present a one-night-only screening event on August 17 in dozens of U.S. cities of the documentary film McLaren, which tells the captivating story of Bruce McLaren, the legendary racing champion, designer, engineer and founder of the iconic supercar that bears his name.

The name McLaren is synonymous with motor racing excellence, and stands today as a symbol for automotive superiority. Yet what is less known is the brand's origins. McLaren recounts the New Zealander's life, from his humble beginnings at his father's auto shop in Auckland, to revolutionizing Formula One racing by becoming the youngest driver ever to win a Grand Prix, to his death at 32. Featuring interviews from his closest friends and family members, the documentary is an unprecedented window into the life of a true genius.

"Auto enthusiasts across the country have been eagerly awaiting the release of McLaren, and we're so pleased to be pairing up with Gunpowder & Sky to bring this documentary to the big screen this summer," said Bernadette McCabe, senior vice president, business strategy, Screenvision Media. "With lots of original racing footage and interviews, this documentary will transport you back in time and leave you feeling both moved and inspired."