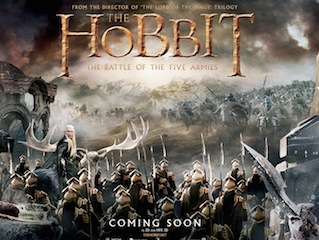 Screenvision has collaborated with Greyhound, the largest provider of intercity bus transportation in North America, to bring its latest campaign to moviegoers nationwide this holiday season through a unique programming feature tied to the upcoming feature film The Hobbit: The Battle of the Five Armies, a production of New Line Cinema and Metro-Goldwyn-Mayer Pictures, opening in theatres December 17.

This promotional program marks Greyhound’s first venture into cinema advertising, and includes a co-branded spot featuring imagery from the third and final film in the blockbuster The Hobbit Trilogy, as well as a programming block, including trivia, unfolding within Screenvision’s Front and Center preshow.

“We’re thrilled to be working with Greyhound, putting their brand front and center with moviegoers during one of the busiest movie and travel seasons of the year,” said John McCauley, executive vice president, CMO and strategic alliances, Screenvision. “We’re equally excited to facilitate the partnership with the highly anticipated finale of one of the most storied film series in history, The Hobbit: The Battle of the Five Armies. Under the creative direction of our in-house group 40 Foot Solutions, the co-branded spot takes a tongue-in-cheek approach when combining the modern-day transportation powerhouse with the mythical world of Middle-earth.”

“We’re excited to present Greyhound to our customers and prospective customers in a modern and fun way,” said Kim Plaskett, vice president of marketing, Greyhound Lines. “Cinema advertising allows us to showcase the modern amenities Greyhound now offers in an epic setting, creating a memorable image of Greyhound for the next time they choose to travel.”

The spot begins with gorgeous scenery taken from The Hobbit: The Battle of the Five Armies, and points out how in this “world of magic and wonder, where anything is possible, every epic journey is accomplished by walking or riding horses, or riding these things (referencing a giant Elk and Trolls of Middle-earth).” The spot then juxtaposes the two worlds by comparing the journeys of the film’s characters with those of the modern world, “but you don’t live in that world. You live in a world of Greyhound buses. Affordable, comfortable, modern buses. So as one epic journey ends, yours can begin.”

The Hobbit: The Battle of the Five Armies www.thehobbit.com