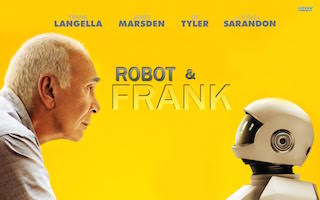 Twenty-eight independent theaters in cities across the country will participate in the fourth annual National Evening of Science on Screen. The event will feature a short introductory video, followed by a unique film and speaker presentation at each venue as part of its Science on Screen program. For example, the Martha’s Vineyard Film Center will screen Robot & Frank with an introduction and post screening discussion with Michael Chuah, PhD Candidate, Biomimetic Robotics Lab Mechanical Engineering, Massachusetts Institute of Technology

Through Science on Screen, theaters creatively pair screenings of classic, cult, science fiction, and documentary films with lively presentations by notable experts from the world of science and technology. Each film serves as a jumping-off point for the expert speaker to explore a related scientific or technological topic in a way that engages general audiences – from the dangers of climate change (The Grapes of Wrath) to the search for extraterrestrial life (Contact).

This program began in 2005 at Coolidge Corner Theatre in Boston, Massachusetts, and has since expanded to other independent cinemas through a national grant initiative funded by the prestigious Alfred P. Sloan Foundation and administered by the Coolidge. This year the event is being held on Tuesday, March 28.

Thirty-five cinemas received a Science on Screen grant in 2016.

"We're delighted to join with the Coolidge in celebrating a National Science on Screen evening in 28 cities across America,” said Doron Weber, vice president and program director at the Alfred P. Sloan Foundation. "With the success of Oscar-nominated box office hits such as Hidden Figures and The Martian, it’s clear that mainstream audiences are starting to embrace science-themed films. Science on Screen goes one step further and shows that just about any popular film—be it epic, comic, satiric, horrific, biographic, dramatic or thrillerific – can lead to an exhilarating discussion of science and technology and add a little salt to your popcorn.”

The National Evening of Science on Screen aims to highlight the rich and varied connections between science and film. This year, movie-and-speaker pairings will address such diverse concepts as the chaos theory, deep-sea exploration, the science and history of musical instruments, and wildlife preservation. Each participating theater will present a different program, with audiences nationwide experiencing the excitement of discovery as they enjoy some scientific enlightenment along with their popcorn.

Program details and much more can be found on the national website, scienceonscreen.org, which also features archival program info, videos, venue information, and grant guidelines.

Sloan's Film Program encourages filmmakers to create more realistic and compelling stories about science and technology and to challenge existing stereotypes about scientists and engineers in the popular imagination.  Over the past 15 years, Sloan has partnered with some of the top film schools in the country — including AFI, Carnegie Mellon, Columbia, NYU, UCLA, and USC — and established annual awards in screenwriting and film production, along with an annual best-of-the-best Student Grand Jury Prize administered by the Tribeca Film Institute. The Foundation also supports screenplay development programs with the Sundance Institute, Tribeca Film Institute, the San Francisco Film Society, the Black List, and Film Independent's Producing Lab and Fast Track program and has helped develop such film projects as Morten Tyldum’s The Imitation Game, Mathew Brown’s The Man Who Knew Infinity, Michael Almereyda’s Experimenter, Rob Meyer’s A Birder's Guide to Everything, Musa Syeed’s Valley of Saints, and Andrew Bujalski’s Computer Chess.

The Foundation also has an active theater program and commissions about twenty science plays each year from the Ensemble Studio Theater and Manhattan Theatre Club as well as supporting select productions across the country. Recent grants have supported Nick Payne’s Incognito, Frank Basloe’s Please Continue, Deborah Zoe Laufer’s Informed Consent, Lucas Hnath’s Isaac’s Eye, and Anna Ziegle’s Photograph 51, recently on London’s West End and coming to Broadway in January 2018. The Foundation’s book program includes support for Hidden Figures: The American Dream and the Untold Story of the Black Women Mathematicians Who Helped Win the Space Race, adapted into a major motion picture, which premiered in January 2017.

For a complete list of Science on Screen events taking place on March 28, please visit scienceonscreen.org.