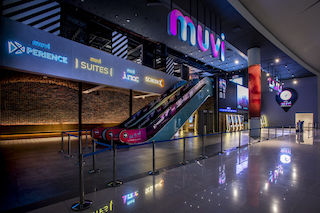 There was so much happening at the global box office in 2021 it was, perhaps, easy to overlook one of the most significant pieces of news: The Kingdom of Saudi Arabia overtook Italy in annual box office in terms US dollars, according to a new report from the London-based analytics firm Gower Street. This put Saudi Arabia into the top six markets in the Europe, Middle East, and Africa region, the report said. It marked the first time on modern record that one of the so-called big six European markets (UK/Ireland, France, Germany, Russia, Italy, and Spain) had been supplanted.

A conservative estimate for 2022 at this stage would suggest a box office this year (as current exchange rates) of at least $290 million, and more likely significantly higher, perhaps $315-395 million. Business to date in 2022 is tracking approximately 45 percent ahead of 2021. With nearly three months of actual box office play-weeks completed this year if the remaining weeks delivered average gains of 18 percent year-on-year the market (at current exchange rates) would finish at approximately $293 million (and overall year-on-year gain of 23 percent). If that average gain could be increased to 30 percent, the market would finish at $316 million (+33 percent year-on-year).

The average gain in play-weeks so far in 2022 has been 61 percent, although this has been skewed by a few weeks of complete closure in February 2021. Among individual weeks of wide-market play the highest week-to-week comparative gain seen against the equivalent week of 2021 has been +50 percent, however, there have also been weeks of decline. 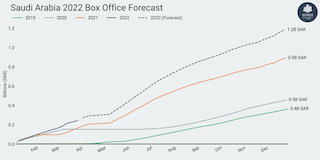 As the market enters this year’s Ramadan, marking a period of low box office until May, we take a look at how Saudi Arabia quickly established itself as a major player on the international box office scene.

The market’s first full year of operating, 2019, generated approximately $97.5 million. This means in just a short time, and while the whole world has struggled with box office regression amid the pandemic, Saudi Arabia has overtaken long-standing European markets featuring in the global top 20, such as the Netherlands, Poland, and its Middle Eastern neighbor UAE. It is likely to stay ahead of these markets and is already tracking well ahead of Netherlands and UAE in Q1 2022, although the Netherlands lost most of January due to a lockdown.

Whether KSA remains in the top six EMEA markets long-term will depend a great deal on recovery progress in the Spanish and Italian markets in this and future years, as well as KSA’s continued rapid expansion of its exhibition sector (see below). Both Spain and Italy are currently tracking ahead of KSA in terms of US dollars for Q1 this year, Italy by approximately 18 percent and Spain by 33 percent.

Although KSA may not hold its top six EMEA position in 2022 its presence in the top six in 2021 signaled it was proving to be the major growth market it was predicted it could be in 2018. Its re-entry into the top 6 in the coming years seems likely. This makes KSA arguably the most exciting market in the region and one of key focus for the industry globally going forward. The rise of KSA as a major box office player on the global stage has been swift.

In December 2017, the country announced movie theatres would be allowed to open for the first time in over 35 years. In January 2018 the Saudi government’s Public Investment Fund fully incorporated the Development Investment Entertainment Company and later that year, it was announced by the PIF that DIEC had signed a deal with AMC to operate AMC cinemas in KSA. 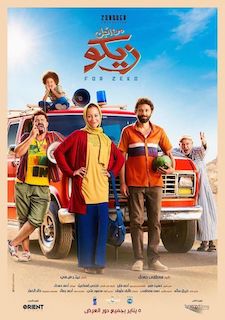 Vox Cinemas, the largest exhibitor in the Middle East and North Africa region, also entered the new market quickly. Vox announced it had been awarded one of the first licenses to operate cinemas in Saudi Arabia on April 20, 2018, with plans to open 600 screens over the following five years. It opened KSA’s first multiplex, a four-screen site at Riyadh Park Mall, later that month. Since then, 14 more Vox locations have opened, most recently a five-screen site at the Galleria Mall in Jubail in October 2021. The company operates 154 screens across its 15 locations in six cities (also including Dammam, Hail, Jeddah, and Tabuk). Nine sites are in the capital Riyadh.

The Riyadh-based Muvi Cinemas became the first wholly home-grown exhibitor brand in KSA, launching in 2019 with a site at the Mall of Arabia in Jeddah in August of that year. It has since become the leading exhibitor in terms of locations and screens, operating 21 sites incorporating 184 screens – this is up from 10 sites and 103 screens at the start of 2021. These include the market’s biggest cinema at the Mall of Dharhan (in Dharhan), which opened in October 2020 and has 18 screens with 2,368 seats.

There are currently 10 AMC sites operating in KSA. Lebanon’s Empire Cinema has five locations in KSA; Latin American chain Cinepolis has two. This brings the total number of locations at the close of 2021 to 53 – up 20 from the start of that year – with a collective 430 screens. Other operators, including Cinemacity, iPic Entertainment, India’s PVR, and Kuwait National Cinema Company, are looking to enter the market either directly or in partnership with local partners.

Bahaa Abdulmajeed, business development manager for entertainment and culture at the Saudi Ministry of Investment, speaking at the Red Sea International Film Festival in December 2021, said KSA has ambitious plans to “increase the number of cinema screens from 430 to 2,600 by 2030.” These are projected to be across 350 locations.

The current number one film, Michael Bay’s Ambulance, sees KSA as its top performing territory so far, ahead of markets releasing the film the same day, including Mexico and UAE. The film’s second weekend, which dropped just 20 percent from its launch, was less than two percent lower than the opening weekend in leading EMEA box office market UK/Ireland.

However, the expansion of the market might also suggest an expansion of the types of movies finding favor. The Egyptian comedy, January-release For Ziko, is the top title to date in 2022 with $11 million in sales.

How a rapidly emerging market might progress in always difficult to judge. However, Saudi Arabia’s arrival on the international box office scene has coincided with the COVID-19 pandemic which makes it even more unpredictable as none of the data for years’ past can provide any real trend-line.

Given how quickly the market has already achieved near quarter of that goal, despite having to contend with resulting disruptions (not least to the pipeline of Hollywood releases) of the pandemic, and the potential, in our estimation, of it rising to perhaps 30-35 percent of that goal this year, the overall expectation of KSA becoming a $1 billion market by the close of the decade does not seem unreasonable. Even at a compound growth rate of just 18 percent per year (including in 2022) the market would hit that target.

This is certain to make Saudi Arabia an increasingly key player in the strategy of Hollywood studios in the coming years.