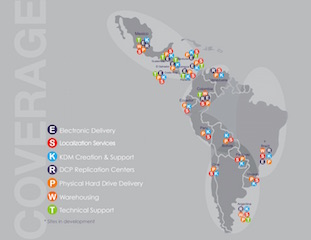 Digital cinema electronic distribution in the Latin American region is rapidly reaching theatres, delivering studio and independent movies as well as live alternative content. Out of the estimated 12,000 screens in the region (some 2,200 theatres), electronic distribution has been growing to reach more than 6,000 screens. Mexico is the main contributor to the number, as Cinepolis and Cinemex account for more than 5,500 of those screens.

All of the studios and independent distributors are consistently using satellite networks to deliver their content and we at TPL Digital Cinema believe coverage will reach more than 1,000 locations by the end of 2016. That represents roughly half of the region's theatres but nearly 60 percent of the screens.

Live alternative content was the key to launch the service in Mexico. In 2009, Cinepolis started using our satellite network to show the WWE Series at 70 locations. In 2010 the South African FIFA world Cup in 3D was still considered a novelty. The breakthrough hit was back in 2014 when we were able to show the Mexico versus Holland FIFA Soccer match live from Brazil at 1,200 screens simultaneously.

Building a network for Latin America is a completely different task than that of the DCDC’s in the United States. We have to deal with 20 countries' customs and the same number of regulatory matters. Moreover, maintaining backup hard drives on time at each of the locations is no easy matter either as distributors across the region have to deal with circuiting hard drives around theatres, in order for distribution costs to make sense.  Long gone are the days when costly used 35mm prints used to roll around those countries. Back in those days only Brazil and Argentina made their own prints, due to mandatory regulations.

TPL is currently the largest network. We reach more than 650 locations and make some 150,000 annual deliveries using the same storage and content management technology as DCDC uses in the US. In comparison, our nearest competitor is Cinecolor Sat, which currently reaches another 150 locations.

The new electronic delivery world is rapidly taking over physical means of delivery. It won't be long before we begin to see terrestrial networks doing backup deliveries. Technology is no longer the challenge.