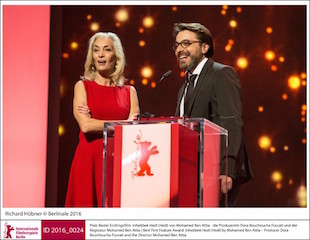 Tamer El Said, director of In the Last Days of the City, received the distinguished Caligari Film Prize (5,000 euros) and Maher Abi Samra, director of A Maid for Each, received the distinguished Peace Film Prize (5,000 euros). Both of these films received support through Sanad at various stages of their production. Mahdi Fleifel, a previous Sanad grantee for his widely acclaimed film A World Not Ours (2012), won the Silver Bear Jury Prize for Short Film for this year’s A Man Returned.

Ali Al Jabri, director of Sanad said, “This achievement is a testament to Sanad’s success in supporting and developing international quality Arab films. It also demonstrates twofour54’s continued support for Arab filmmakers in the region.”

Al Jabri said, “Sanad serves as a vehicle for identifying and supporting remarkable projects and we are confident that such films will go on to create a meaningful body of work that ensures greater Arab artistic representation in contemporary world cinema. This recognition of the calibre of films we support from the Berlin International Film Festival is hugely encouraging, and demonstrates the growing demand from global audiences for seeing the latest films from the region.”

Inhebbek Hedi (Hedi) was a hit for the festival’s jury as well as prominent industry critics with the official jury comment: "Everyone on this jury was unanimously moved by the tenderness of this performance. In this hard to play role, of this diffident young man, who holds back his feelings you see and feel every emotional shift he is going through. It’s a brilliant performance – sensitive, delicate precise and totally absorbing!"

Sanad supported films have continually been featured at international film festivals such as Cannes, Berlin and Venice, and have received international recognition by receiving prestigious co-production support, winning distinguishing awards and accolades. Sanad provides not only funding but valuable industry support at critical stages of production and continues this support during later stages of release and distribution.