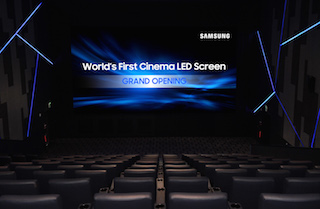 For a company that’s relatively new to the professional cinema business, Samsung has had an impressive year and there are no signs it’s slowing down. In March at CinemaCon 2017 in Las Vegas, and working with GDC Technology, the company created a major stir by unveiling its prototype LED Cinema Screen. Two months later it finalized its $8 billion acquisition of audio giant Harman International, including, importantly here, the JBL cinema group. Following that, and in short order, the company received DCI-compliance certification for its LED screen technology and installed its first commercial cinema screen in South Korea. A few weeks ago, Samsung installed a second LED screen in the same South Korean theatre. In just seven months Samsung has seriously disrupted the professional cinema market.

The cinema industry’s established display technology companies – Barco, Christie, NEC and Sony – have taken notice. Sony has been showing its own LED cinema screen technology but still seems undecided about bringing it to market. The other companies all have the capability to compete head-to-head with their own LED screen technology. But at the same time, all of them have made a big investment in laser projection technology. They also all believe that laser projection is a much more cost-effective technology for exhibitors and can deliver the same as or better than results than LED screens. More on their reactions in a bit.

I recently spoke with Chris Buchanan, director, business development, Samsung visual display division. When I asked him what prompted Samsung’s move into the professional cinema market he countered that the company has been involved in cinema for a long time. “Samsung equals content equals cinema,” he said.

Buchanan seemed pleased when I suggested that Samsung had disrupted the cinema market. And he was candid about some of the issues critics of his company’s LED cinema screen have raised, namely the cost and the ability to deliver 3D and quality sound. He said that his partners at JBL had developed an audio solution for the screen and that “we are working on a 3D solution for the cinema screen with our internal research and development lab team.”

He wouldn’t reveal the price of the LED Cinema Screen but called it “competitive with RGB laser.” 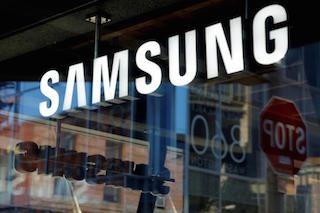 At CinemaCon there was talk that Samsung would bring an 8K version of the LED screen to market. Buchanan said that for now the company will concentrate on 2K and 4K options and called 8K a business question for exhibitors to answer. He emphasized the fact that the Digital Cinema Initiative has already certified the screen.

When Buchanan and I spoke he said he was hopeful that Samsung would be able to place a screen in a Los Angeles area theatre by late September or early October. Instead, the response to the first screen that was sold to the Lotte Cinema in South Korea prompted the exhibitor there to install a second.

“That screen was the one originally slated for September/October,” said Buchanan. “We decided to change our plans and deliver a 2K screen to a post-production studio first to enable studios to review their movie content. We will deploy our first screen in the L.A. area. The location and timing looks to be closer to the holiday season. We hope to have an update at ShowEast.”

It’s not surprising that none of Samsung’s competitors in the cinema market completely dismiss LED screens: they all have the same technology and are, presumably, working on similar systems of their own. However, as stated above, they also all have significant investments in laser projection – and hundreds of working laser projection systems installed.

For Barco and Christie the concerns with LED screen technology for cinema center on cost, robustness and the ability to deliver quality sound and 3D, which are both key money makers for exhibitors.

NEC did not respond to my request for a comment for this article.

Stijn Hendrickx, vice president, cinema, Barco said, “Barco strongly believes that a premium, differentiated experience for moviegoers is of key importance, and will become even more so in the future. The most cost effective way to deliver that today is with our Flagship Laser Projection series. Barco has a long history and strong innovation track record in LED and as a technology agnostic company we always look to bring the best visual experience to moviegoers. However, we will only bring solutions to the market when we believe they are economically viable for exhibitors over the whole product life cycle. For the moment LED is still a very expensive technology with a lot of investments to make from the exhibitor.”

Brian Claypool, the vice president in charge of Christie’s global cinema product development, said, “When considering costs, color accuracy and range, display considerations and other factors, LED cinema solutions still need to evolve to meet the requirements of cinema. Granted, there’s a need for an economically viable solution to replace the first installed-base of digital projectors – some approaching ten or more years of reliable service – but in Christie’s opinion, that is currently best met with new RGB laser projection solutions. In fact, RGB laser projection has been in the market for some time and costs are coming down as second-generation RGB laser projectors are introduced for mainstream cinemas yet still bring a tangible improvement in the quality of the image.”

“What about the ability to display 3D content?” Claypool continued. “3D content is still a major draw to cinemas, especially in specific regions around the world. But delivering 3D is an area that LEDs don’t excel in. Being at the forefront of innovation for imaging technologies, Christie has several core focuses, among them cinema projection and LED displays. However, until LED screens are economical to purchase, install and operate within the stringent requirements of the cinema world, for now the optimal and viable imaging technology remains front projection.” 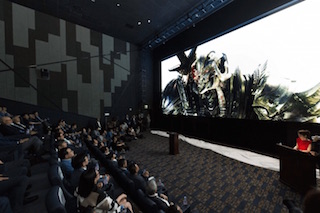 Michael Karagosian, founder and president of MKPE Consulting is an unabashed fan of Samsung’s LED Cinema Screen. Formerly he was technology consultant to the National Association of Theatre Owners. Currently he is co-chairman of the American Society of Cinematographers Next Generation Cinema Display Committee, whose mission is the preservation of artistic intent in emerging cinema projection and display technologies.

He has no affiliation with Samsung but he was among the people who saw the invitation-only demonstration at CinemaCon.

“If you want to focus on the display,” Karagosian said, “the features that make emissive displays distinct are no fans, deep blacks, and a non-reflective surface that attenuates ambient light and allows the dynamic range of the LEDs to be seen in an uncompromised manner. The opposite is true with cinema screens, which by definition, must reflect light, including ambient light in the room, diluting the ability to deliver deep blacks. Therein lies a key problem for high dynamic range and projectors.”

Karagosian understands that the audience experience with LED screens is not the same as it is with projectors and that not all of the differences favor LED.

“Sound has to be different,” he said. “How different before the audience objects remains to be learned. Sound may be fifty percent of the experience, but is it fifty percent of the ticket [price]? Heating, venting and air conditioning also moves from the lamp house in the projection booth to the front of the auditorium. That could have an impact on ambient noise level.”

“Power consumption is interesting. If it’s a dark movie, the power bill should be less. On the other hand, movies with lots of bright outdoor scenes could bump up the bill,” he said. “On the bright side (no pun intended), there’s no masking required. Those awful letter-boxed ads will look better with black surround instead of grey screen.”

Despite Karagosian’s appreciation for what Samsung has achieved, he also understands the realities of the marketplace.

“The digital transition had heavy involvement by studios due to the enormous subsidies they were about to put into it and the long-term savings that would benefit them,” he said. “But there is no return on investment for studios to move to HDR. If I hadn’t seen [Samsung’s LED Cinema Screen] directly, I’d probably be yawning about it. What I saw looked enticing from an audience perspective, more so than I expected. The exhibitors I know who saw it were just as impressed.  But the cost has to come down for it to get wide interest. Cost has to come down to $.01 per pixel for this technology to overtake projectors. The display industry is several factors above that cost today.”