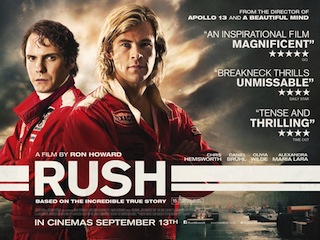 What a thrilling, and enjoyable piece of entertainment!  This is a character-driven story, fueled as much by the adrenaline and testosterone of two drivers as by the high-octane petrol their Formula One cars consume.  I’d see it again.  The performances are extraordinary.  There is a polish to this film, a sense of pace, a feeling of being at the track and in the cars, nearly overwhelmed by the noise and the apprehension and the sheer terror of guiding what is essentially a fuel-filled bomb around hairpin turns at 170 miles an hour, often on slick wet pavement. Early in the movie we learn that every year 25 drivers start the Formula One season and on average, two die. So, do the math. You are watching a sport with an annual death rate of eight percent.  It may have been that sense of danger that drew two extraordinary competitors – a Brit, James Hunt (Chris Hemsworth) and an Austrian, Niki Lauda (Daniel Bruell) – to the track, and for more than half of the 1970s, they taunted and tested and tried to best one another to become World Champion.  This is their story and the only thing they had in common was an extraordinary belief in their ability to drive.  The film is structured like a race, where first one, then the other takes the lead as they follow each other through two exciting hours of film.  You don’t have to be a fan of racing to enjoy this movie and, in fact, you may enjoy it more if you don’t know what really happened to these two men, or at that race at Nuerburgring, or in that year 1976 when the Hunt-Lauda rivalry reached its point of greatest intensity.  This is a story of racing, but really it’s a story of a fierce rivalry and of the role that competition can play in making great contenders even better.  This is exciting stuff.