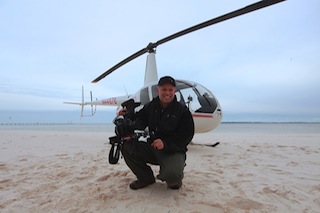 “There are a lot of reasons why I chose the Canon Cinema EOS C300 camera,” West recalled. “One is its lightweight design. We had to shoot a lot of close-up stunt fighting that required me to be just inches away from the performers. These shots could only be done hand-held, and the EOS C300 camera is so completely well designed in terms of portability that it enabled me to maneuver it into positions where heavier cameras just couldn’t go. Guys were being vaulted into the air and I was on the ground shooting them flying over me. Hand-held shooting also helps boost the energy level of fight scenes because it enables you to get in close and add your energy to the performers, so things become even more intense. The compact size of the EOS C300 camera and its detachable LCD monitor also enabled me to keep my eye on what was going on around me in the middle of these tricky fighting situations.”

The Canon Cinema EOS C300 camera’s body weighs just over three pounds and can accommodate a wide range of shooting setups. It can be held by its removable, rotating side handgrip, its detachable top handle, or a wide variety of third-party support devices and accessories. Equipped with a Canon Super 35mm CMOS sensor, innovative Canon DIGIC DV III Image Processor, and a 50 Mbps 4:2:2 MPEG-2 codec for full 1920 x 1080 HD, the EOS C300 cinema camera delivers a selectable ISO range up to 20,000 for outstanding low-light performance. This proved crucial for Blunt Force’s fight scenes, which took place in dark, grim prison interiors. 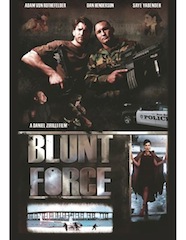 “We didn’t have a huge budget, and we were shooting on-location so I needed a camera we could really rely on,” West explained. “The EOS C300 camera doesn’t require monster lights drawing lots of power. Its ability to go up to ISO 20,000 is just amazing. The image holds up in those ranges, and it gets you to the point of being able to light more naturally. But even when you’ve lit your set the way you want to, actors can still step into dark areas. With this camera you can immediately adjust for that and continue capturing the action. You always want to see the actor’s eyes and faces and not be in the dark. The ability to see into dark situations with the EOS C300 camera was extremely helpful.”

West added that the ability to instantly play back footage recorded on the EOS C300 camera’s digital CF cards was another benefit to the production, as it enabled the director and stunt performers to review complex fight sequences and determine whether reshoots were needed before moving on to the next scene. “We also ran an external monitor for the director to look at,” he noted. “The LCD that comes with the EOS C300 camera got the most use during shooting. It has amazing picture quality.”

Four inches wide, this removable 1.23 megapixel LCD monitor/control panel rotates 135˚ left/right or 270˚ down, and can be mounted directly on the camera body or on its removable handle unit. In addition to its use for live monitoring, the LCD can also display a waveform monitor, vectorscope, and other displays for adjusting picture quality. “That was really helpful,” West added, “especially on a run-and- gun shoot such as this one, to be able to quickly glance at those and evaluate where you are. My career has included the worlds of both broadcast video production and filmmaking. It’s nice to be able to use ‘video’ features such as a waveform monitor and a vectorscope for motion-picture production. I love being able to use the power of both worlds to be as creative and efficient as I want to be.”

West added that production was further expedited because both his EOS C300 and EOS 5D Mark II cameras used EF-mount lenses, which enabled quick lens changes when necessary. “With the EOS 5D Mark II camera on my shoulder strap I was able to switch lenses right then and there,” West confided. “I didn’t have to call for the AC to run to get another lens. I would put either the wide or longer lens on my EOS 5D Mark II camera, and put the other lens on the EOS C300 camera. There was barely any delay, which really helped the flow of filming the action. When you get in the heat of the battle with all these different stunt people working and you are getting all these different shots, it’s crazy to have to delay things because of a lens change. So this technique I came up with really paid off in speed.”

“Director Daniel Zirilli and I both like the look of wides and longs,” West elaborated. “The movie didn’t play that much in the mid-range. We used the Canon 16-35mm ultra-wide angle for the fighting sequences, and then the longer lenses for everything else. I love Canon lenses and have a long history of using Canon ENG lenses for mainstream TV, including music shows, specials, and feature documentaries. The Canon HJ22ex7.6B and HJ14ex4.3B ENG lenses are my favorite HD zooms for shooting TV, and I always request them on every project.”

“The Canon Cinema EOS C300 camera is an incredible tool to be able to get the exposures you need,” West stated. “The combination of the EOS C300 camera and my experience in shooting reality TV enabled us to shoot a feature in essentially sixteen scheduled days. Every day was a packed day. We shot stunts and fighting scenes. I used the EOS C300 camera to shoot a police chase handheld from a helicopter flying six feet off the water, and it came out perfectly. The director was ecstatic because we got it on the first take.”

“Blunt Force is going to look like we spent a lot of money on it, and much of that will be thanks to Canon equipment,” West concluded. “I love everything that Canon’s been doing for a long time, and I’m very happy that they are in the motion-picture production world. I am very impressed with the EOS C300 camera and now I want to get into 4K production with the Canon Cinema EOS C500 camera for the next film that I’m scheduled to shoot.”