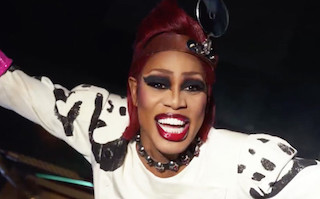 Originally released in 1975, The Rocky Horror Picture Show has become one of the most enduringly popular movie musicals of all time, a staple of late night cinemas worldwide. A celebratory reimagining of the tale of Dr. Frank-N-Furter and his friends for Fox Television pairs original star Tim Curry (this time as the narrator) with an otherwise all-new cast in a rousing tribute to its predecessor that also offers plenty of fresh twists.

The new show honors and keeps the spirit of the original but it has new actors, new performances and a whole new energy,” said Fluhr, whose previous musical collaborations with Ortega include last year’s hit Descendants. “There were challenges, but it was fun…a lot of fun.”

Among the challenges was an accelerated delivery schedule. Knowing that time on the mix stage would be at a premium, Fluhr and Wilkins coordinated with the music and sound editorial teams to ensure elements were delivered in a form that would allow them to work efficiently and creatively. “We worked out a strategy with the music department for how they would stem out the songs,” Fluhr said. “I needed enough separations for a 5.1 mix, but not so many that it became unmanageable.” 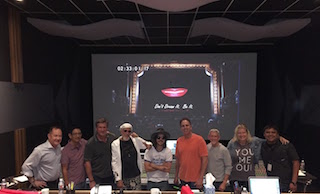 Fluhr added that many of the musical numbers were pre-mixed by recording engineer Shane Stoner. “We did a lot of planning before we hit the stage,” Fluhr said. “The music department came through and delivered everything that we asked for, and it paid off creatively. Music is the most subjective stuff we deal with. Someone may like one thing while someone else wants it done a different way. You need to have flexibility built in to make changes…and do it fast. We had that.”

So central was the music that blending in dialogue and effects required considerable finesse. “The songs are so big and well known that it was tough to find places to play anything else,” said Wilkins. “And because the show is so iconic, any missteps would be spotted immediately. Our credo was first to do no harm, don’t crowd anything important musically or dramatically.”

The show’s signature song serves as a case in point. “Time Warp has everything,” said Fluhr. “It starts out with solos and ends with a chorus and every instrument playing. But there is also a lot of choreography and that can’t be silent. Ben did excellent work in feathering Foley dance steps into the song. Otherwise, we would have had people dancing on air.”

The Rocky Horror Picture Show: Let’s Do the Time Warp Again! was one of the most complex musical productions ever finished at Roundabout. Engineer Teddy Salas modified Stage E’s workflow to address the complexity of the mix, adding extra faders to the Icon D-Control Digital Console to allow Fluhr to work with the large number of music tracks efficiently.

In the end, though, the sheer quantity of sound alone is not what resulted in a great soundtrack. “Obviously, you have to hear the dialogue, you have to hear the words,” Fluhr concluded. “The dialogue and the songs drive this movie. They bring a lot of energy, but they can very easily overwhelm other sound elements. Tom de Gorter and his editorial team from Atomic Sound did a great job in providing us with a whole template of sound effects that relate to things your see, but our job as mixers is to filter through that. Mixing isn’t about playing everything. It’s about making choices and simplifying things so that what you do play actually counts.”