The Room Transforms a Black and White World 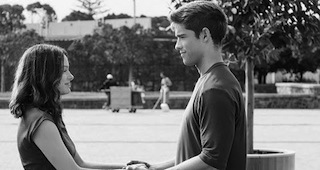 The Room, the boutique finishing facility located within Technicolor-PostWorks, New York, recently completed two months of post-production finishing on The Giver, the new film from director Phillip Noyce and The Weinstein Company. In a project involving numerous creative and technical challenges, the facility handled editorial conforming and color grading. The latter included applying the finishing touch to an onscreen world that undergoes a gradual transition from black & white to color.

Based on Lois Lowry’s international bestseller, The Giver centers on a boy, Jonas (Brenton Thwaites), who comes to question the colorless, utopian community he has grown up in after learning about the real world from an elderly man (Jeff Bridges). The reawakening of the boy’s memories and emotions is reflected in his growing ability to see in color.

Finishing editor Allie Ames conformed all this disparate source material into a common timeline in preparation for color grading. She also incorporated visual effects—eventually totally more than 700 shots—provided by Method Studios, Mr. X and other vendors. With new material and revisions arriving daily, editorial and rendering work proceeded virtually round the clock. 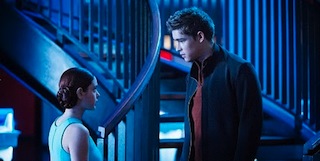 “It was a complex and large scale project,” recalls The Room’s Ben Murray, noting that the facility has a 4K pipeline based on Autodesk Flame software that allows editorial, color grading and rendering to proceed simultaneously. “Allie did a wonderful job in wrangling it all. While delivering reels for grading to our colorist, Jack Lewars, she was also delivering multiple references to the various editorial teams and alerting them to any issues that arose. That kept us ahead of the curve and helped us deliver on time.”

The first 25 minutes of The Giver are fully black and white. The visuals then begin a very gradual change to color lasting more than 35 minutes. Director Phillip Noyce and cinematographer Ross Emery began planning this transition in pre-production, with Emery conducting camera tests and preparing a saturation map covering every scene. During production, a DIT applied values from the saturation map to camera footage for review on set. Similarly, a dailies colorist applied Emery’s saturation choices to dailies media provided to the editorial and visual effects teams.

“We mapped the transition from black and white to color very carefully,” Emery says. “It was such an integral part of the story and something that resonates with fans of the book. We wanted to do it justice.”

Although the final grade closely adheres to Emery’s original plan, it involved slight alteration and refinement. “The DI process is fantastic as we can react to the changes in story and character that happen during the editing process,” Emery observes. “You can make subtle changes to the way you shot things to support aspects of the story that emerged during the cut.” 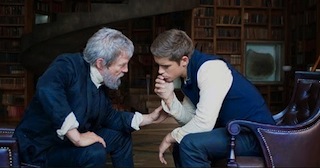 The transition to color isn’t entirely gradual. Jonas first regains the ability to see red and that change appears suddenly when he is presented with an apple that he sees as a crimson hue. Lewars created that effect in the grading suite by isolating the fruit. “The apple is bright red, while everything else is at 20 percent saturation, so it really pops,” Lewars recalls. “The difference between the apple and its surroundings makes it look uniquely beautiful. It is a very emotional moment.”

The effect carries over and is expanded upon in the following scene when Jonas encounters Fiona (Odeya Rush). “It was one of those beautiful moments,” recalls Emery. “We are still in the low saturation mode but then there is a close-up of Fiona and Jonas sees her in color for the first time.

“I noticed when we were grading that scene that her eyes were a beautiful blue-green and so I said to Jack, select the color of her eyes and bring them up more. Suddenly, Jonas was seeing a girl with blue-green eyes. It changed the scene completely.”

For the most part, the emergence of color is so subtle that audiences may not be aware that it is happening. “We begin to sneak in the tiniest bits of colors; at first, it only appears in certain places, the highlights,” Lewars says. “But it progresses and becomes more and more colorful and by the end, you are watching a normal color movie. We want audiences to think, ‘Gosh, when did that happen?’”

Emery says that he found it fascinating to manipulate color in this way. It increased his sensitivity to the way audiences perceive and respond emotionally to color. “In one scene, early on, we played with two different versions, one that was pretty much black and white and one where we introduced a bit of blue,” he says. “That forces the audience to shift slightly. It was interesting to see how different people reacted to it, and it was certainly a lot of fun playing with that stuff in the DI. To do that successfully, you need a colorist who is very sympathetic to the story and has a light touch, which Jack does.

“I quickly realized that this was not a story that could be told solely through dialogue and images; it had to be supported with the color saturation to lead people the right way.”