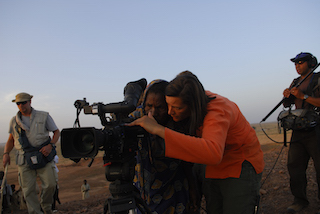 Rooftop Films will host their first ever Gala on January 31 at Saint Bartholomew’s Church in Manhattan to raise funds for Rooftop’s vital community programs as well as celebrate two gifted, creative and fearless artists who have made a contribution to the art of filmmaking this past year: Kirsten Johnson (Cameraperson) and Taika Waititi (Hunt for the Wilderpeople).

The Gala will also include a live cinema performance by Academy-Award-nominated filmmaker Sam Green and critically acclaimed animator Brent Green.

Kirsten Johnson has worked in the documentary field for 25 years and shot for over 60 directors as a cinematographer, including for acclaimed filmmakers Laura Poitras, Michael Moore, Barbara Kopple, Gini Reticker, Raoul Peck, Amy Ziering, and Kirby Dick. She has followed people in conditions of war, poverty, and violence, during emergencies in hospitals as well as in the joys of unexpected victories.

She has filmed the subtleties and extremities of the range of human emotion. In her critically acclaimed 2016 feature Cameraperson, Johnson revisited footage from her quarter century tenure to engage with the questions of ethical dilemmas and unintended consequences in the filming process. The result was a formal and collaborative innovation that pushed the boundaries of nonfiction filmmaking.

Taika Waititi’s career began with a bang when his short film, Two Cars, One Night, was nominated for an Academy Award. His following feature-length films have won awards at Berlinale, as well as the Maui, Sydney, Melbourne and AFI Film Festivals, with Boy becoming the highest grossing local film in New Zealand’s history.

For more information about the event visit the Rooftop Films website http://www.rooftopfilms.com/gala2017