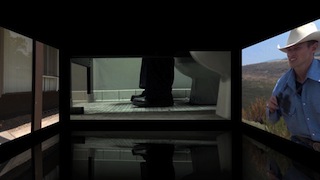 Rooftop Films, AT&T, Forest City, and the Downtown Brooklyn Partnership will present an elaborate, four-screen set-up for the New York premiere of Meredith Danluck’s North of South, West of East at MetroTech Commons on August 2. The show begins at 8:30 with live music. Admission is free and the event is open to the public.

North of South, West of East premiered to acclaim at the 2013 Sundance Film Festival. The format of this show is unlike any other—the audience will sit surrounded by four screens—to accommodate the larger-than-life format of Danluck’s work. Expansive events like these give Rooftop the opportunity to stretch the boundaries of traditional film screenings, and to work with ground breaking filmmakers to create unforgettable cinematic experiences.

The movie tells four stories, but is one coherent film, with plots that are compelling, funny, twisted and insightful. A portrait of post-modern America (or “post-hope,” as Danluck describes it), the four cardinal directions of the title imply both a sprawling cross-continental landscape film and a film located exactly nowhere. It asks the rhetorical question, “Where is north of south?”

The four characters represent archetypes of American struggle: the autoworker (Ben Foster), the cowboy (James Penfold), the out-of-work actress (Sue Galloway) and the hustling immigrant (Erik Quintana). Each are comically out of step with the times, stumbling into epiphanies. Galloway’s disarmingly dim-witted ways lead her on a misguided Mary Kay makeup mission, but when she’s literally run off the road, she discovers her inner sassiness. Foster’s gas-huffing grease monkey is clearly looking to delude himself, but uncovers within the underbelly of Americana a genuine weirdness he could never fantasize.

Inspired equally by late-night television and avant-garde cinema, in dividing the viewer’s attention Danluck creates an experience that is fragmented and ephemeral, fitting for the story’s themes. Like the characters on their road trips, the audience has agency in their choices — but you’re just as likely to disappear into your lifelong dream as you are to get smacked in the face with cold French fries. Either way, it could only happen here, wherever here is, in America.