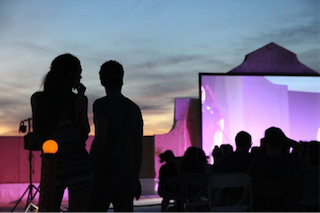 Rooftop Films in New York City is celebrating its 20th Annual Summer Series. This year’s series will feature more than 50 outdoor screenings in more than 13 spectacular venues, with live music, special enhancements and the best new, independent films from around the world.

“Nineteen summers ago, our founder Mark Elijah Rosenberg gathered together a batch of short films that he loved, handed out a thousand fliers and lugged some gear up onto a roof,” said Dan Nuxoll, program director of Rooftop Films. “There was no plan to launch an organization, he just wanted to bring thoughtful people together in a fun location and show them a batch of films that he found meaningful. He hoped that doing so might create an event that might change the way they thought about their culture and their neighbors. The roofs and crowds and films have gotten bigger, but as we embark upon our 20th summer of Rooftop Films the formula remains the same: show people brilliant new films and create an environment that is more expansive than a movie theater, more thought-provoking than a concert, more fun than a party, and as affirming as a night out with friends. We're proud of what our community has accomplished and hopeful about what is to come, and for the next three months we hope to bridge the past and the future by presenting some of our favorite films of this year--and a few from years gone by--all shown outdoors, all across the five boroughs of our beloved hometown.”

The vicennial edition kicks off on Wednesday, May 18th with a special sneak preview screening of 2016 Sundance U.S. Documentary Grand Jury Prize Winner Weiner on the rooftops of Industry City. The official opening night will follow on Friday, May 20th with This is What We Mean By Short Films, a collection of some of the most innovative new shorts from around the world. The screening will take place at Bushwick Generator, two blocks away from the McKibbin Lofts where the Summer Series took off in the late 1990’s. Both shows will include live-music before the screenings, filmmaker Q&As and complementary after-parties, sponsored by Stella Artois.

Rooftop Films short film slate and additional feature films will be announced in the coming weeks.

The 20th annual Rooftop Films Summer Series continues through August, with screenings of some of the best independent films of the past year in a variety of exciting and engaging outdoor locations across all five boroughs. It is Rooftop Films’ goal with each event and each season to re-imagine the festival, reinvigorate communities across the city, and remind audiences why they fell in love with New York in the first place. With live performances, audience interaction and enhanced themed events at amazing venues, Rooftop turns each film screening into an unforgettable event, and they're going bigger than ever for their 20th Anniversary.

Rooftop Films has live music prior to every outdoor screening, and this year we will also have more music onscreen than ever before, with multiple screenings of new music documentaries. Rooftop and House of Vans in Greenpoint are teaming up for multiple shows featuring music docs followed by live musical performances, including a first look at Andrew Cohn’s new Danny Brown concert doc, followed by a live performance by Danny Brown, and the NY premiere of Los Punks: We Are All We Have, featuring live performances by multiple Latino L.A. punk bands. Rooftop will also present Rooftop alum Morgan Neville’s The Music of Strangers: Yo-Yo Ma and the Silk Road Ensemble, as well as Matt Conboy’s Goodnight Brooklyn: The Death By Audio Story, with performances by bands that frequented the beloved but recently shuttered underground Brooklyn performance space. Cincinnati’s Q-Kidz Dance Team figure prominently Anna Rose Holmer’s Sundance hit, The Fits, and the Q-Kidz will be performing live prior our screening.

In addition to feature and short film programming, this year’s series will include a number of unique events and partnerships, including: the return of the Rooftop Films Storm King Art Center Cinema Ramble featuring multiple film installations, and specialty programming with International Documentary Film Festival Amsterdam (IDFA), The Sundance Film Institute, and SXSW Film. To celebrate their 20th anniversary Rooftop Films will also present a number of repertory programs, including short film programs featuring the early works of some of Rooftops most successful alumni filmmakers, as well as “Best of New York Non-Fiction” and “Best of New York Shorts,” which will trace the changes that New York has undergone over the past two decades.

Tickets for opening weekend are now available via pre-sale for Rooftop Films Members. Dates, short film programming, tickets will be announced next week. Memberships are available at rooftopfilms.com/membership.