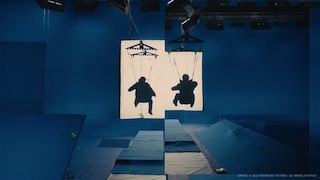 Led by VFX supervisor Arnaud Brisebois, RodeoFX worked on CG aircraft exteriors and interiors, including fighter jets in flight, a helicopter taking off and landing, and a spaceship interior.

The most technically challenging sequence has Banks and Donnelly entering the alien ship for the first time, through a tunnel in which gravity disappears, allowing them to walk vertically up the shaft. Rodeo FX created full digital doubles of the actors, including the challenging fabric texture of their orange hazmat suits.

Rodeo FX previously worked with Villeneuve on Enemy (2013) and Incendies (2010).

Shot entirely in Quebec, Arrival is based on Ted Chiang’s novella Story of Your Life. It follows linguist Louise Banks (Amy Adams), theoretical physicist Ian Donnelly (Jeremy Renner), and US Army Colonel GT Weber (Forest Whitaker) as they seek to discover the intentions of extraterrestrials that have landed on Earth.