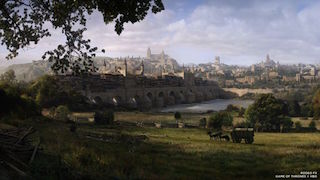 Rodeo FX has won a Visual Effects Society Award for its work on season five of Game of Thrones. The award for Outstanding Created Environment in an Episode honored the studio’s creation of the city of Volantis. Rodeo FX received the award last night at the Beverly Hilton Hotel in Los Angeles and can add it to the VES Award it won last year for its work on Birdman.

“We are very proud that our work has been rewarded with this prestigious award,” said Matthew Rouleau, VFX supervisor who led the Rodeo FX team. “Game of Thrones gives us an opportunity to shine and it’s gratifying to have our VFX contribution recognized by our peers.”

The city of Volantis was created completely in CG, replete with a crowded market atop a majestic bridge and surrounded by large buildings humming with 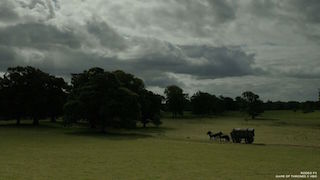 activity. Working from a live plate using a Roman bridge in Córdoba, Spain as a stand-in, the Rodeo FX team created the buildings and market on the bridge, as well as the background matte painting. The artists modeled everything in the scenes, including gutters, roof tiles, and windows.

In addition to Volantis, Rodeo FX relied on its proficiency in animation, crowd simulation, and digital matte painting to build other key sequences, including the destruction of the Harpy statue and the eerie Smoking Sea of Valyria as part of the over 200 visual effects it delivered for the show. Rodeo FX worked closely throughout the season with Joe Bauer, VFX supervisor, and Steve Kullback, VFX producer on Game of Thrones. The popular TV series also won a VES Award in the Outstanding Visual Effects in a Photoreal Episode category for a fourth year in a row. 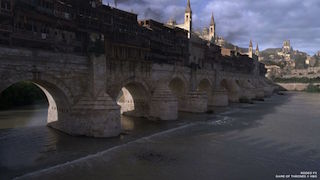 ”Our work on Game of Thrones is the result of a complete team effort at Rodeo FX,” added Sébastien Moreau, president of Rodeo FX. “Congratulations to our winners and to all the VFX crew for this recognition of their achievements.”

In addition to its two VES Awards, Rodeo FX has won two Emmys for its VFX artistry on Game of Thrones.

Adapted from A Song of Ice and Fire, by George R.R. Martin, Game of Thrones is produced by HBO and stars Peter Dinklage, Emilia Clarke, Lena Headey, and Maisie Williams. It is the most popular series on HBO. To read more about the contribution of Rodeo FX toGame of Thrones, visit http://www.rodeofx.com/all-films/got5