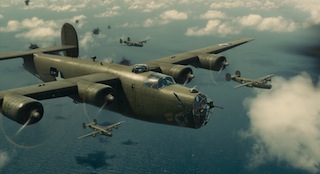 Rodeo FX produced 240 stunning visual effects shots for Angelina Jolie’s World War II biopic Unbroken. Partnering again with Industrial Light & Magic, the Montreal-based VFX studio crafted photorealistic images, creating the breathtaking air combat between the B24s and the Zero fighter planes, among other spectacular sequences. Unbroken has been nominated for three Academy Awards, which will be handed out this Sunday.

"Rodeo was a great partner in not only creating the visuals but understanding the sensibility we were looking for,” said Bill George, visual effects supervisor on Unbroken. “For me, it's the difference between just doing the work and bringing true artistry to it."

Based on the bestselling biography by Laura Hillenbrand, Unbroken tells the story of war hero, Louis Zamperini (Jack O’Connell), whose B24 bomber crashed into the Pacific. Zamperini was captured and spent over two years in horrific conditions in Japanese POW camps. Given the star power involved – from director Jolie, to writers Joel and Ethan Coen, DP Roger Deakins, and to Zamperini himself, who was still alive during production – this is a high-profile project that required meticulous attention to detail from the 100 artists who worked on the film at Rodeo FX. The director was intent on a visual styling that was authentic to the time period with invisible VFX that did not distract the viewer from the powerful human drama.

“Our biggest challenge was to make our work imperceptible so the viewers would be carried away by the action and the emotions,’” said Sébastien Moreau, VFX executive producer at Rodeo FX. “This is Louie’s story and everything we did had to be a slave to the story. We wanted to be historically accurate in the details and give the whole film a hyper-real look.” 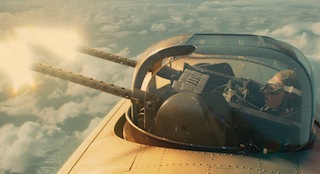 Every shot was designed so the viewers could put themselves into the story and nowhere was this more evident than in the 154-shot sequence that depicts the bombing of the Japanese-held island of Nauru. Zamperini’s Super Man, part of a fleet of B24s, is attacked by Japanese Zero fighter planes. Almost every element in the sequence – the Super Man bomber, the fleet of B24s, the Zero planes, the airstrip, most of the sky, and the bullets and tracer fire – was created as CG imagery.

Rodeo FX built digital models of the B24 using blueprints and historical photos as references. “The airplane asset was a challenge because we only had a limited number of historical photos,” explained Matthew Rouleau, VFX supervisor at Rodeo FX. “We had to invent various details, building the asset from panelling to rivets, and then shooting from every angle and every distance.”

“The unique approach to the B24 effects in Unbroken was to experience the action almost completely from Louie's point of view," explained George. "The camera was often positioned so our view was blocked, giving us only glimpses of the intense fighting that is happening outside the plane. We also had the desire to stay as true to realistic exposure levels in and out of the plane.”

One of the challenges Rodeo FX faced was making these fully CG sequences look photoreal, including lighting. “We had a lot of good concept work to match to, as well as war footage,” said Rouleau,. “All our modeling, textures, and compositing had to come together perfectly to make the whole look real.”

The cockpit interiors were filmed using a partial model set on a gimbal, surrounded by a whitescreen to provide more natural light. Rodeo FX created the effect of reflections in the glass, as well as compositing scratches, dirt, and textures. 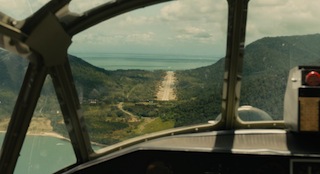 After its fight with the Zero planes, the damaged Super Man lands at the Funafuti airstrip. The island, airstrip, soldiers running around, buildings, and foliage were all made of digital elements created by Rodeo FX. This environment started as a plate that Rodeo FX extended with matte painting, flak explosions, bullet tracers, bullet hits, and textures. The team shot practical elements – including dust, debris and rocks – with a RED Epic at the studio in Montreal, and blended them with their FX renders for a more photoreal look.

Because the Funafuti runway is too short for a B24, the landing sequence involves a tire digging into the ground and shredding, which makes the plane turn on its side and kick up sand and dirt before crashing into a pile of rocks. This sequence required a great deal of fine-tuning together with the client, as well as practical shoots in the Montreal studio and hours of animation and simulation. The tire blowout used a reference shot of a rapidly rotating tire hitting the ground.

“This is real in-your-face stuff,” said Rouleau. “We did a few scale tests with a smaller wheel [the B24 wheels were five-feet tall], running it into the ground and filming it with a GoPro. To get the tire to rip apart in a believable way, we hand-animated all the bits of flying rubber.”

Rodeo FX has a long history of working with ILM, having created visual effects together on such films as Pacific Rim, Terminator,Indiana Jones, Mission Impossible, and Red Tails. ILM’s Bill George was also VFX supervisor on The Planet of the Apes (2001) and won an Oscar for the VFX in Innerspace (1987).

“Pulling this challenging project off with with Bill and ILM was fun,” said Rouleau. “He knows what he wants and, because of his vast experience, when we showed him work in progress, he understood where we were going with a shot and could provide guidance efficiently. We are really proud of the work we did on Unbroken – this collaboration with ILM is one of our favorites so far.”

Rodeo FX is having a big year: it won a VES award earlier this month for its work on Birdman; it won an Emmy Award in 2014 for its work on Game of Thrones; and it expanded its presence in Los Angeles, where it opened an office for its Hollywood clients.