Rockin’ with the Captain 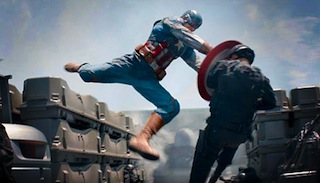 CJ 4DPlex, the South Korean maker of a 4D technology-based cinema experience for feature films, will launch its first premium movie in the United States tonight with a press screening of Captain America: The Winter Solider.  This weekend general audiences will be able to get the 4D experience at Regal Cinemas L.A. Live Stadium 14 theater in partnership with L.A. Live and theater operators AEG.

In a 4DX auditorium every patron sits in motion-based seating that has been synchronized to the film they’re watching with more than 20 different effects optimized by the 4DX in-house editing team, maximizing the feeling of immersion within the movie.

CJ 4DPLex introduced its version of the technology at CinemaCon in March and showed new effects including more realistic motion such as natural chair movement, an upgraded water system to stimulate rain, the ability to switch the water on or off and LED lights on the footrest for safety. And during the convention, the company announced a deal with AEG to bring the first 4DX technology in the United States.

“Los Angeles was the natural choice for the first U.S. location to carry 4DX,” said Byung Hwan Choi, CEO of CJ 4DPlex. “With AEG, owner and host of the world’s most exciting entertainment venues as our strategic partner, we are very much looking forward to welcoming our audiences to a moviegoing experience never before seen in the U.S.”

“We have been impressed with 4DX’ success in other parts of the world, and look forward to unveiling the technology at L.A. Live,” said Nick Baker, senior vice president AEG Global Partnerships. “We are always looking for leading edge technology and innovative product and amenities to introduce at our entertainment destinations and, this will inspire and encourage people to descend upon L.A. Live.”