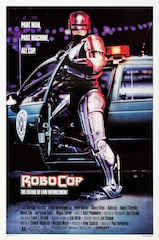 A fan-funded documentary, which examines the legacy of one of Hollywood’s best-loved action movie franchises is being made by a University of Northampton, United Kingdom, graduate. Filmmaker Christopher Griffiths, who graduated from the Media Production degree course in 2013, raised £34,000 on the Kickstarter funding platform to make RoboDoc, which explores the making and legacy of the RoboCop franchise.

Released in 1987 to critical acclaim, the original RoboCop film was a box office hit, grossing more than $50m in North America alone.

Widely acknowledged as an all-time classic, it tells the story of a murdered US police officer brought back to life as the superhuman cyborg law enforcer RoboCop – and spawned two sequels, plus a 2014 reboot of the original.

“This has very much been a dream project for me,” said Griffiths, who runs his own production company, Cult Screenings. “It'll be very hard to top this one if I am honest, as RoboCop was where it all started for me at a young impressionable age and ultimately led me to where I am now in film making and telling the stories of how such beloved cult classics came to be.”

Griffiths and his crew spent a whirlwind three weeks shooting in the states this summer, which saw them interview more than 50 cast and crew, including Robocop director, Paul Verhoeven, writers Michael Miner and Ed Neumeier and other principal cast members and crew. More shooting will take place over the next few months.

He said: “It has been an incredibly intense, and at times, challenging project unlike anything we have worked on before – taking us from the UK to Los Angeles, San Fransisco, Dallas and New York, with very little free time.” 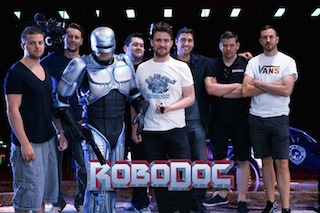 Griffiths’s been quick to thank the 520 backers who donated the tidy sum of £34,000 to Cult Screenings via the Kickstarter funding platform to produce RoboDoc. You can watch the RoboDoc Kickstarter video.

“This was very much my company's most ambitious project to date, with us aiming for an initial total of £20,000 – now I honestly don’t know how we would have done it without the excess amount,” said Griffiths. “I was kind of surprised by the amount we raised, but as a fan of the original movie, I know there are lot of like-minded people out there who love this iconic figure of RoboCop, who all seemed to see this film at far too young an age, but ultimately grew up with it and have their perceptions of the movie change as they grew older, which is a topic I am covering within this project.”

RoboDoc is slated for a July 2017 DVD and Blu-ray release, to coincide with RoboCop’s 30th anniversary, plus there are plans for screenings in both Dallas and Los Angeles. Griffiths also hopes the documentary will make appearances at film festivals around the globe.

It’s the third documentary Griffiths and his fellow producers, Gary Smart and Adam Evans, have made. Their first was Leviathan: The story of Hellraiser, while You're so cool Brewster!: The story of Fright Night is due for an October release.

Griffiths credits his university experience for any success he may enjoy. “If it wasn't for university, I probably would still just be a fan boy who sits down all day and night watching DVDs and Blu-rays,” he said. “Instead, I have developed skills in the three stages of film production which I have since developed further and am now overseeing many aspects of my company’s projects, from pre to post-production.”

He added: “The Media Production course has helped me develop an array of new skills which have given me some direction in life and ultimately led me to visiting parts of the world and meeting people I would have had absolutely no hope of achieving by myself.”

Tim Coley, senior lecturer in Media Production, said: “I know Chris has been working on this and other projects for quite some time. Success in the competitive world of media production isn’t always immediate, but with talent and perseverance anything is possible – and Chris and the team are certainly testament to this.”

To find out more about RoboDoc, visit the Facebook page.​