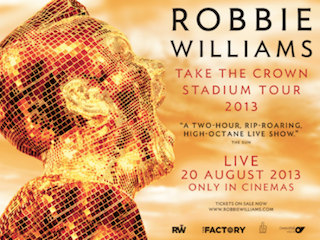 Since he first stepped on stage for the first night of his Take The Crown Stadium Tour 2013 at Dublin’s Aviva Stadium in front of 65,000 fans, Robbie Williams has been wowing crowds around the UK and earning rave reviews in the process. On August 20 Robbie Williams will perform at Estonia’s 70,000-capacity Tallinn Song Festival Ground and fans in digital cinemas around the world will have the chance to catch the entertainer live on the big screen.

This broadcast of the penultimate show of his first solo stadium tour in seven years will give his fans the perfect chance to catch Williams in action as he rips through his two-hour show that includes his biggest solo hits such as Bodies, Millennium, Let Me Entertain You and Angels.

Take The Crown Live From Tallinn, will have a theatrical release across 27 territories, with a further 18 airing in mid-September. Tickets are available from now through participating cinemas or via www.robbiewilliams.com.

This broadcast follows a number of successful live-to-cinema events in 2013, including the Metropolitan Opera, The British Museum’s Pompeii Live and the National Theatre’s production of The Audience with Helen Mirren. Williams was one of the original pioneers of the idea, having broadcast his performance from the BBC Electric Proms into 250 screens across 23 territories in 2009 – a Guinness World Record at the time.

Omniverse Vision CEO, Grant Calton, “This is a hugely exciting event both for us and for the burgeoning event cinema industry; we are delighted to be working with IE Music and look forward to delivering some stellar cinema attendances.”

The trailer and cinema listings can be viewed at www.robbiewilliams.com/cinema