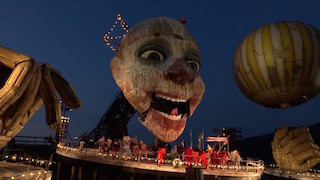 CineLife Entertainment and CinemaLive are bringing a new production of Giuseppe Verdi's opera Rigoletto, captured live at the 74th Bregenz Festival, to U.S. cinemas February 10-16. One of Verdi's most popular works, Rigoletto is a story of sacrifice and revenge, of a father's rage and a daughter's shame.

The striking set was erected on the shore of Lake Constance, created by Philipp Stölzl and Heike Vollmer, featuring a fourteen-meter high clown's head fixed onto a crane that can lift, lower and rotate. It serves as the stage's centerpiece and an artistic representation of the iconic Rigoletto court jester imagery, and a pair of fully mechanized hands rise out of the water on either side.

Stephen Costello, Vladimir Stoyanov and Mélissa Petit lead the voice cast, supported by the Prague Philharmonic Choir, and accompanied by the Vienna Symphony Orchestra. Circus stunts staged by Wired Aerial Theatre are performed at incredible heights above the lake.

Director Philipp Stölzl says, "Rigoletto is a fascinating piece, without the classic separation between hero and villain. With this production we'll be going inside a colourful, circus-like and carnivalesque world, with a liberal dose of commedia dell'arte."