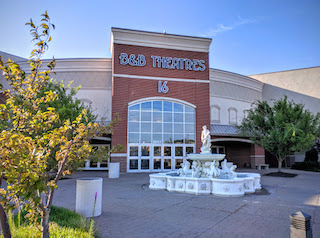 Combining one of the oldest architectural designs in the Western world – the amphitheatre – with some of the most advanced motion picture exhibition technology available today may sound like a great idea for a new movie theatre. Applying that concept to an existing theatre, though, makes the challenge seem truly daunting. But that’s exactly what happened when B&B Theatres acquired an old movie house in Overland Park, Kansas and set about the work of making it their own. The result is the world’s second largest ScreenX auditorium and its first ScreenX Amphitheatre, complete with a unique approach to the DTS:X sound system.

“It was the existing shape of the room,” said Brock Bagby, executive vice president, B&B Theatres, when asked about the inspiration for creating an amphitheatre.

That makes the ultimate transformation sound simpler than it actually was because, while the room was already in the same basic form factor as it is today, the proportions were all off. To begin with, the screen was small, just 36 feet wide – a major problem in today’s premium large format cinema world – and the room also had a balcony.

Bagby said one of the first things they did was to gut the space, including removing the balcony, and build two new walls. Then someone raised the possibility that they could create something unique: an amphitheatre. Bagby contacted the engineering team at CJ4DPlex, the manufacturer of ScreenX immersive systems, and asked them if it could be done. After some initial skepticism, the CJ4DPlex team said they were eager to give the idea a try. 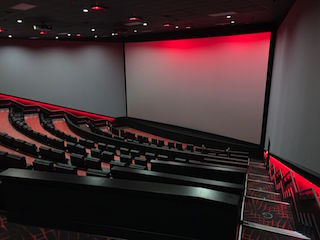 That excitement extended to the top man at CJ4DPlex, CEO JongRyul Kim. He said his company welcomed the chance to work with B&B Theatres on something so innovative and “to shake up the cinema industry.” He said the finished room offers an optimized view of the action on screen allowing audiences to have an even more immersive experience. In addition, his company is currently exploring the idea of building its own ScreenX Amphitheatre in Korea.

No one thought creating the amphitheatre would be simple and there were new challenges every step of the way. What made the effort worth trying was the success that B&B, the sixth largest theatre chain in North America, has had with the ScreenX Giant Screen auditorium that opened last year at its flagship theatre in Liberty, Kansas.

That theatre opened even before DTS and CJ 4DPlex announced their strategic alliance to bring DTS:X immersive audio technology to ScreenX theatres worldwide. The ScreenX screen in Liberty is four stories tall and seven stories wide.

To date, customers have not been dissuaded by the extra eight dollars that B&B charges for ScreenX. Since Liberty was the first ScreenX theatre in the country and the largest in the world, it has attracted a lot of attention around the region. Bagby concedes that, because of the novelty, he’s able to draw from a much larger radius than typical theatres do, including his own.

“People come from as much as a hundred miles away,” he said, “and all age groups love the technology. The ScreenX Grand Screen [in Liberty] is our number one drawing room.” As just one example, the Grinch movie that was released for the holidays last November was so popular [in ScreenX] that B&B extended the movie’s run for several weeks. “That was a big success,” said Bagby. 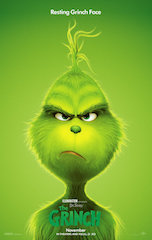 In all, the amphitheatre took about six months to complete. The first hurdle to overcome was how to place the projectors. The basic ScreenX design features a large main screen with traditional DCI-compliant laser projection and a series of smaller projectors lining the sidewalls.

B&B’s ScreenX Amphitheater features projectors that line the ceilings of the auditorium, maximizing the view of the main screen and wings by up to 50 degrees (22.5 on the left and 22.5 on the right) and projected onto B&B’s signature premium large format Grand Screen.

But because of the unique angles created by the amphitheatre design, the projectors had to be moved into positions that are different from all other ScreenX auditoriums, including B&B Theatre’s own. Bagby said, “If any of those projectors was moved even an inch, it would throw the whole thing off.”

The other issue to confront was the sound system.

“We had a few challenges placing the speakers,” said H. Loren Nielsen, vice president, content relations and strategy at DTS. Ultimately they decided that the sidewall speakers would be recessed into the walls themselves and covered with a custom-made fabric. “It’s quite exciting,” she continued. “The seams are gone. The walls are perfectly flat. It’s just a clean look.” 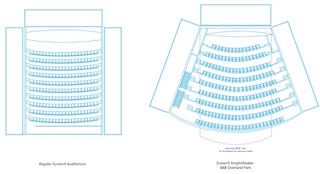 Bagby said the reflective silver fabric is custom made in Korea by a company that works exclusively with ScreenX.

“We are pleased to continue our relationship with B&B and GDC to provide more people with exhilarating, lifelike theatrical experiences,” said Nielsen. “Our DTS:X audio technology puts viewers directly in the scenes they are watching. This level of immersion is what we think all moviegoers should enjoy.”

While the screen in Overland Park does not match Liberty in size, it’s still an impressive 53-feet wide. The total size of all three screens in the amphitheatre is 207 feet, making it the second largest ScreenX theatre in the world. B&B will charge the same eight-dollar up charge as it does in Liberty.

“B&B Theatres is dedicated to enhancing the movie-going experience,” said Bagby. “We believe that DTS:X immersive sound in our Grand Screen auditoriums is a winning combination and our Grand Screen ScreenX with DTS:X room offers an extraordinary experience that our guests can’t get anywhere else. When the sound takes over, it’s just incredible.”