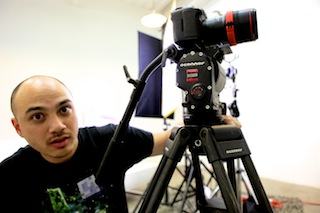 Starring Danny Trejo, Kinga Philips, Frank Krueger, Kristoff St. John and Louis Mandylor, Redemption is an action/drama that takes place below ground in New York City. The plot follows a documentary filmmaker into the depths and dangers beneath the streets where the homeless, gangs and police are at war.

Originally written as a feature, Redemption was spun into a successful web series to peak audience interest. Because it was shot on a small indie budget, Bui needed to be careful in choosing his camera package. “We decided to shoot almost the entire movie with a Canon C300 and Zeiss primes powered by Anton/Bauer batteries,” Bui explains. “And, we supported the camera package with the OConnor 1030D and 30L carbon fiber sticks.”

Bui also needed a lighting package that would fit his budget and work in challenging, small, hard to reach—and hard to power— locations. He chose to use Litepanels lightweight LED fixtures, including a Sola ENG Flight Kit, three Sola 6 LED Fresnels and three flat panel 1x1s (two floods and a spot) to light the locations. 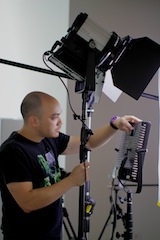 Because he always wants to look at dailies, Bui’s viewing and editing capabilities had to travel with him. “I never go anywhere without my laptop,” he says. “It has to be ready for me at a moment’s notice. No matter where I go, it goes with me in one of my Petrol Bags—either on my back in a backpack or in the Rolling DigiSuite DSLR Camera Case next to my other essential equipment.”

Bui knew his final images would be viewed on anything from a small iPhone to a monster HD monitor, so he was careful to craft his shots for impact, no matter what the platform. This was definitely an action feature, where Bui found it necessary to shoot 10 pages and, at times, over 20 setups per day. “It was all about supporting the story,” he explains. “In one sequence, we had an actor up on a platform 30 feet off the ground. The lead actress looked down from that platform, watching the underground gang initiate a new member until the bad guy spots her. We had to do a smooth pan from a fire below and then tilt up to her engrossed in smoke and flames with the villain coming after her.”

Although Bui’s concept for the shot was ambitious, he notes that it was not a problem since, “we had a fully rigged Canon C300 with Anton/Bauer batteries, monitors, rails, and more, mounted on the OConnor 1030D. This package allowed us to set up quickly, work fast, and tear down easily. We couldn’t have gotten those smooth pans without the OConnor.”

Lighting, too, had to be easy and fast to set up. “The key villain’s big scene was in a small room with no air conditioning,” he explains. “We shot on a hot day in a downtown Los Angeles warehouse. We didn’t need to put our actors under additional heat, so we used the Litepanels Sola 6s with diffusion for fill and the Sola ENGs as key lights. Litepanels were exactly what we needed to get the dramatic, dimly lit, seedy look of underground New York tunnels without heating up our actors!

“Because Litepanels fixtures are power efficient, they can run off batteries or standard wall plugs,” he adds. “We often attached Anton/Bauer batteries to the Sola ENG lights, and were able to rig the lights without having to run cables or power. We just clamped the light up and clamped the battery right next to it. The fixtures are smaller than standard, so they didn’t take up a lot of room in the tight areas we shot in.

“The lights even provided great effects mocked up to look like New York vents,” he continues. “We used them to create dramatic shadows by mounting the Sola ENGs up high, and pointed down through grates.”

Redemption: The Darkness Descending written by Frank Krueger and directed by Marc Celbanoff was launched at an event during Cannes on May 17 and will be featured at ComicCon in July. The feature is set to air in Europe and the web series/feature will be in the United States later this year. www.thedarknessdescending.com