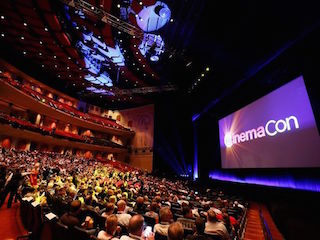 On Tuesday at Caesar’s Palace in Las Vegas, the opening ceremonies of CinemaCon 2022 got underway as they have in past years, with speeches by Charles Rivkin, chairman and CEO of the Motion Picture Association and John Fithian president and CEO of the National Association of Theatre Owners. Both men praised the efforts that helped the cinema business begin to emerge from the ravages of the pandemic. Both were realistic about the motion picture industry’s present, and optimistic about its future. Rivkin’s main topic was the ongoing battle against content theft and, while he offered a long list of recent success stories, he acknowledged that the fight continues. Fithian’s main topic was simultaneous release which he insisted works for no one. But the overall theme of the morning was the understanding that this is a watershed moment in the entertainment business and over the next few years we will see the cinema experience redefined yet again.

“In 2021, the combined global theatrical and home/mobile entertainment market grew to $99.7 billion,” said Rivkin. “That’s a 24 percent increase compared to 2020, but also notably overtaking the pre-pandemic 2019 value.” Pleased with that success, he nevertheless emphasized that those numbers may not continue to grow unless more can be done to end piracy. “On average pre-release piracy can take away as much as 20 percent of box office revenue,” Rivkin said.

“Piracy’s dramatic evolution is a compelling drama,” he said. “The difference is, the perpetrators, and the threat they pose to our industry, are very real. We have no illusions about the scope and the severity of the problem. For us to have any kind of meaningful impact, many things must continue to fall into place, including working with governments around the world to expand our pirate site-blocking efforts, and more broadly, driving a sea change in the consumer culture that understands why piracy harms us all.” 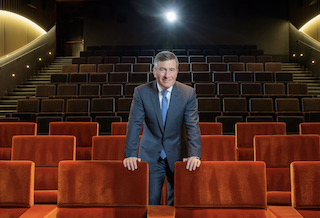 “Piracy is now a digital, global industry – with illegal websites and streaming subscription services run by operators all around the world,” he said. “One example is f.movies, the most popular streaming service in the world, [with] 80 million visits a month. And half of those visitors come from the U.S.”

“In 2017, we created the Alliance for Creativity and Entertainment – or ACE as we call it – a global coalition of our six MPA studios and the world’s biggest entertainment companies. Just a month ago, we shut down three illegal Canadian streaming subscription services this way – services that offered more than 15,000 live channels, video on demand, and pay per view content. And fewer than two weeks ago, we shut down an illegal subscription streaming service in Florida that attracted 200,000 visits per month and had as many as 50,000 active paid subscribers at any given time.”

“Thanks to our new partnership with Google,” said Rivkin, “we have removed 10,000 illegal domains from search results – across 10 countries. We have taken down sites offering thousands of films and television series and receiving tens of millions of visits per month, from Peru to Pakistan to Singapore, and from Turkey to Tunisia to Morocco. And in North America, from a high of 1,400 illegal websites and streaming subscription services in 2019, our antipiracy campaign has dramatically reduced that number to about 200. And we are not stopping until that 200 number goes down to zero.”

Rivkin added, “By establishing security benchmarks and security assessments for everyone in the supply chain, we are creating a gold standard for trust, accreditation, and security. And with the right efforts to build awareness with consumers, lawmakers, and the media, we can continue to build a culture that recognizes piracy for what it is – theft, pure and simple, and a direct threat to creators, the creative workforce, and the creative community everywhere.” 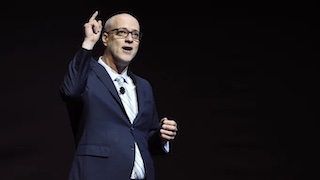 NATOs’ Fithian singled out many of the people who supported movie theatres during the pandemic. “The Directors Guild of America and the Motion Picture Association have been tremendous partners during this crisis,” he said. “More than 100 directors rallied to support our industry by signing an unprecedented letter to Congress asking for help. MPA members have helped us re-open safely and have provided new films to bring customers back. Members of the creative community have shown their support in so many ways to make one thing crystal clear: their best work is made for the big screen. I applaud artists who refuse to accept the false narrative that movie theaters are a thing of the past and that the future will be one in which every movie is consumed at home. These leading creatives know better, and they are on the right side of history. There’s no denying that our industry has changed during the last 18 months.”

But Fithian insisted that movie theatres will play critical role in that future, a role that can’t be duplicated by any other medium.

“Exclusive release periods remain vital to the survival and success of the theatrical experience,” he said. “Theatrical windows won’t be what they were before, but they can’t be what they were during the pandemic either. What the future holds is up to our members and distributors to decide but let us be clear about one thing: simultaneous release Does. Not. Work. For anyone. A steady flow of strong movies released with exclusive windows is essential to exhibition’s recovery, and to the profitability of the entire movie ecosystem.”

“This is a historic turning point for our industry,” Fithian continued. “We are about to enter an era of great experimentation that I believe will only bolster the importance of the big screen experience. Movies that were starting to shy away from a theatrical release will grace our screens again. Our customers want more options, and there are content providers looking to satisfy that demand in new theatrical release models.

“Our members will redefine what the theatrical experience means. Cinema is much more than a passive form of entertainment. It’s immersive and lifechanging. Cinema is not meant to exist on the same digital playing field as funny cat videos on YouTube, or endless TikTok scrolling. Billions of people around the world had the option of going to the movies taken away from them during the pandemic, and the longing to return to that experience was palpable. Now that they are coming back, the excitement is invigorating. The sense of community that cinema creates is more important than ever.

Fithian concluded, “Cinemas are a vital part of the small towns and big cities in which they are located. The foot traffic movie theatres create will help surrounding businesses recover from COVID-19. According to an Ernst and Young study that NATO released last week, in addition to the $18.3 billion in direct movie theatre revenue, movie-night spending on other businesses here in the U.S. amounted to $5 billion in 2019 before the pandemic hit. We will return to that level again.”