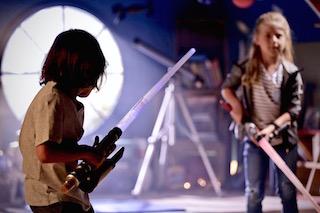 Two visual effects-heavy commercial spots for Disney highlighting the latest Star Wars toys and merchandise benefited from play to the firing of children’s imagination: Choose Your Path focuses on The Last Jedi merchandise, featuring three children playing in an attic bedroom; a boy puts down a Kylo Ren toy, which then comes to life to fight Lego starships, while two of the children duck as a ship speeds past them on the red salt flats of Crait – which then seamlessly turn back into the bedroom with a classic Star Wars wipe. Galaxy Of Adventures features the original Star Wars trilogy and Solo: A Star Wars Story, with more children playing in an attic room, interacting with the toys and merchandise in a series of tableaux reminiscent of scenes from the films.

The core production team behind the spots – director Steven Hore, director of photography Alex MacDonald and digital imaging technician James Marsden – have worked together for over 15 years, mainly on commercials. They chose to shoot with Cooke Anamorphic/i lenses in a deliberate nod to the cinematic look of the first and third Star Wars trilogies.

“Cooke lenses were famously used on the first trilogy, and Cooke Anamorphic/i’s were the closest modern lenses we could find to replicate that look,” said Macdonald. “We loved the glass - it gives so much to skin tones, and the way it works with light really encapsulates the cinematic look. We then realized the bonus was that we could get all this telemetry from the lenses as well, through the /i Technology sensor.”

Hore agreed. “We knew from the start that we wanted to short anamorphically – it was a quick win in terms of transforming a small interior space into something approximating the Star Wars world. However, when you only have a few seconds of screen time for a commercial you can’t go mad with flare or it risks overwhelming the story and products. The Cooke Anamorphic/i’s have bags of character, they make everything feel really creamy and they have a lovely flare and focal characteristics, but they don’t bombard you.

“We also knew there would be a huge amount of post-production so we needed lenses that would allow reliable replication of shots in post. The added bonus of /i Technology to increase the information we could provide to the VFX team made the Cooke Anamorphic/i lenses an easy choice.”

The team has shot a few previous projects with various Cooke lenses, and had seen the benefits of recording the lens metadata. Marsden said, “We used Cookes on the last short film I worked on, shooting Raw with an Alexa SXT. If the camera department came back and wanted to know what the stop was or which lens we used, we had all that information. People don’t realize you have this amount of power and annotation in the lens interface. It’s not hard to implement, and gives tremendous time saving and cost-saving benefits on set and in post. The level of data you can pull out as a frame by frame record, like aperture, position and which specific lens you’re using, is fantastic.”

The team’s regular camera of choice, including for these spots, is the Sony F55. “We generally now use two F55s and two Raw recorders. The F55 is the first Raw system we could get into as a modular system - it’s small and light enough to go on a crane, use handheld, you can do anything with it – and the /i system works natively with Raw data,” said Macdonald. 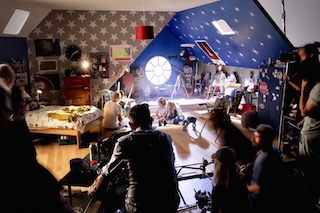 For the Star Wars commercials shoots the team shot lens grids, but the additional camera required for this can be a tough sell for production budgets. “Having the lens data eliminates the need for this, plus it’s very helpful to double check that you’re using the same lens and at the same settings when returning after a break or shooting additional plates for a scene,” said Macdonald.

This proved to be the case when, a few months later, the Disney team wanted to substitute the products shown in one of the spots for a different set of merchandise. As Macdonald explained, “We did another day’s shoot with the same children against a blue screen with the new toys, and simply dropped the shot into the original ad. We were able to match it quickly and easily because we had the original information about which lens we had used and all the settings.”

There were also several shots where the lens data was crucial for post. “We were shooting a tracking shot behind the kids’ heads against a blue screen which, in the final version, would place them into a battle zone scene,” said Hore. “We had to do the shot hand-held, so every take would have been slightly different. With the /i data to help with tracking, the kids were composited seamlessly into the film scene, which gave the spot great production value.”

Another example of a complex VFX shot saw a Yoda mini figure transformed into a full sized character. “You can imagine the compositing that went into it – taking a 75mm shot of a tiny figure and then selling it as a 24mm wide shot of a full size Yoda – that’s quite a Jedi mind trick to pull off,” added Hore. “It was a lot of work; a combination of compositing and referencing and setting up equivalent lenses in post to ensure the handover between shots was seamless. It was that much simpler thanks to the /i Technology lens information.”

The anamorphic flare plays a big role in many of the Star Wars films, and the team wanted to capture that for the spots by playing with the lighting. “Star Wars is set in a make believe world where a planet might have two suns, so we felt freed from the idea that the sun has to come through one window at a particular time. The spots were all about the kids’ imaginations and we caught something of that ourselves,” said Macdonald. “We used a mixture of old fashioned, big tungsten light sources and daylight on both spots, and punched holes through the sets at strange angles to shine lamps straight through into the lenses, just to get that anamorphic flare. We also had a smoke machine and shook a dusty blanket around to get lots of dust motes in the air.”

“In these kinds of spots, you have to cover off a lot of plot in a short space of time,” said Hore. “The cinematic look and anamorphic character of these lenses not only give a beautiful image but also help to tell this story really economically – the audience instantly recognizes the environment and understands what it represents, so we can tell the story quickly and elegantly. With the bonus of the /i Technology lens data, Cooke Anamorphic/i lenses were perfect for these projects.”