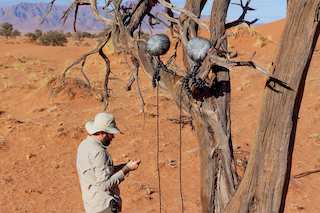 Sound recordist George Vlad travels to some of the most remote places on earth to record the unobstructed sound of nature. The result is that the Surrey-based 36-year-old now specializes in exploring and recording the beauty of our planet’s most remote places, and clients globally utilize Vlad’s self-funded services and sounds. Hollywood film studios, game development studios and production companies like Netflix license his content.

From recording winds in the freezing Romanian Carpathian Mountains to capturing the sounds of the Ethiopian desert in searing heat, his Sennheiser microphones and headphones are essential tools of his trade that accompany him everywhere.

In 2016, he was offered an artist’s residency South Africa. “I did a lot of sound recording there,” he recalls. “Then I started to organize my own expeditions to Africa, South America, Asia. It never felt like I had to do any of this; I was always excited about it and started to build on that.”

“I was recording the sounds of the Erta Ale volcano in Dallol, Ethiopia and it was a life-changing experience listening to the lava boiling with my Sennheiser MKH 8060,” recalls Vlad. “I was travelling with a group of guides, militia, police and porters. For them it was probably the 100th time at the edge of an active volcano, nothing special at all. 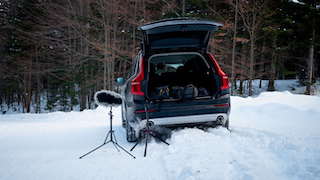 “I was asked, why I am recording this stuff? I passed over my HD 26 headphones to one of the locals and he was overwhelmed. Until then, they only knew the reflected sound of the volcano, but had never heard the direct sound of the caldera. One of them was so moved when hearing it for the first time he started crying.”

Vlad notes that heat is not the only challenge he faces when recording. “I was in Romania to record heavy winds in the mountains at night with two MKH 8040s and an MKH 30, but the wind almost disappeared, and the temperature quickly fell way below freezing.” Sometimes the batteries of the recorder drain too fast, or the knobs freeze, but he has never experienced any issues with his Sennheiser microphones “...in any outside conditions from -37°C to 49°C.” 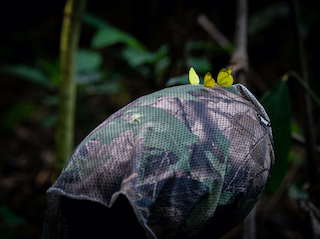 While location recordings often require innovative approaches, Vlad has a very unusual method of capturing in-the-wild surround sound: “My favorite rig to record with is four MKH 8020s, placed around a tree. It sounds a bit cheesy, but it gives me the perspective of the tree listening to the environment in 360 degrees. Of course, a tree doesn’t listen to anything. But if you think about the grooves and the texture of the bark, it’s something like head-related trans-reflection, like your nose, face, and its contours. The sound bouncing round the tree colors it in a certain way. So, listening from the tree’s perspective in the rainforest is my ultimate recording technique and I will use it whenever possible. The low noise floor, high build quality and excellent bass response of Sennheiser 8020s comes in handy when recording in the wilderness. And they perform exceptionally well in extreme humidity, especially when you look at the competition.”

Vlad does extensive risk assessments and has completed first aid and remote medicine courses to mitigate as much as possible. His expedition to Gabon, for example, took eight months of preparation, one month on location and up to six months of post-production. Seemingly no task is too challenging for Vlad however, such as travelling to the Congo by flying to Gabon and then continuing by car.

“And hiring a car in Gabon is more expensive than buying it outright, but as a Westerner you are not allowed to buy a car or even drive outside the capital,” he says. “I’ve built my expeditions one on the other and very slowly pushed my comfort zone, so I’ve never been really far outside it. There have been situations where I’ve felt a little threatened. My friend and I were the only westerners in the Congo rainforest and sometimes the locals weren’t so excited for us to be there; we didn’t know the local mores, or social norms. But then I sometimes think it can be way more dangerous in Central London than in the Congo rainforest.”

Vlad’s forthcoming plans include a major expedition to Antarctica in 2022, which he has been planning since 2019, plus trips to Madagascar, Sumatra or Papua New Guinea. “It is rather difficult to find fixers locally, but I will try my best and will probably visit the country that eases its Covid restrictions first.”