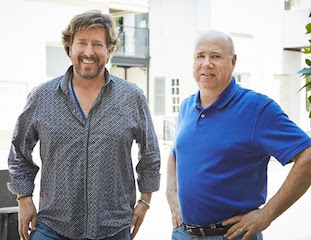 Continuing to grow its sound department, Sony Pictures Post Production Services has added award-winning re-recording mixers Steve Pederson and Daniel J. Leahy to its creative staff. Pederson and Leahy have worked as a team on a number of motion picture projects, including the Antoine Fuqua film The Equalizer, which, as independents, they mixed on Sony Pictures’ Cary Grant Stage last year. They are currently mixing Fuqua’s latest film, Southpaw on the Sony lot. Upcoming projects include HBO’s True Detective and Fuqua’s remake of The Magnificent Seven.

“The arrival of these two talented sound artists is part of our commitment to remain the finest sound post production facility in Southern California,” said Tom McCarthy, Executive Vice President, Sony Pictures Post Production Services. “Steve and Dan are consummate pros who have been doing great work for many years. We are very excited to have them join the Sony team.”

Pederson and Leahy each has more than 100 feature films to his credit. Pederson’s career includes tenures at Universal Studios, Warner Bros. and Todd-AO. He won an Academy Award for Best Sound in 1996 for Apollo 13 (shared with Rick Dior, Scott Millan and David MacMillan), alongside one other Academy Award, three BAFTA and two Emmy Award nominations. His many credits include Rock of Ages, The Blind Side, Hall Pass and Schindler’s List.

Leahy’s career spans 30 years and includes work at Todd-AO, Warner Bros., and Universal Studios, and as an independent. He won Emmy Awards in 2010 and 1999 for The Pacific (shared with Michael Minkler and Andrew Ramage) and The Rat Pack(shared with Michael C. Casper and Felipe Borrero), respectively. Other notable credits include The Boy Next Door, Olympus Has Fallen, Training Day and The Fast and the Furious. One of his first credits as Re-Recording Mixer came on Back to the Future.

Commenting on their decision to join Sony Pictures, Leahy said, “We’ve developed an excellent relationship with Tom and his people, and are excited to join the team. It’s a great combination.”

Pederson added that he and Leahy were impressed by how Sony has grown and modernized its sound facilities. “While the creative concepts of our craft haven’t changed through the years, the way we achieve those concepts has changed dramatically,” he explained. “Sony has embraced changing technology without losing sight of the basics that keep filmmakers confident they’re being taken care of. To work in a progressive department that sits on a historic movie studio lot in a great Westside location made it an easy choice. We’re very happy to be here.”