Randall Dark and Kristen Cox: In Their Own Words 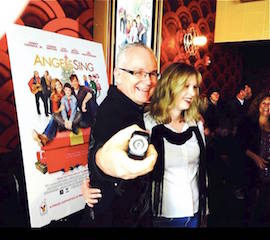 Randall Dark is one of the pioneers of making movies and television programs in large format digital video. I’ve known him for more than thirty years and known his wife, Kristen Cox for more than twenty. When Randall recently confided in me that he has Alzheimer’s disease, he encouraged me to think more about Kristen’s needs now than of his own. I reached out to her to offer my support and told her I wanted to write a profile of Randall to remind the industry of how important his contributions have been for the broader world of what we now call digital cinema. She agreed and here is part of that profile, told in their own words.

Digital Cinema Report: When did you first know that your efforts had finally paid off and HD filmmaking was an accepted part of the production process?

Randall Dark: I walked into a Best Buy and saw our footage playing on an HDTV for sale on the retail floor. I said to myself, “We’re here.” I’ll never forget that moment.

DCR: Many people have mentioned your work with the Jackson Hole Wildlife Film Festival. When did you first get involved with Jackson Hole?

RD: In the early years of the festival, I was invited to speak. Everyone was there; manufacturers, engineers, creatives. We collaborated and ran tests to push the new technology and see what it could do compared to film.

DCR: Several people I’ve interviewed have also talked about the importance of your documentary Texas Wild. Talk about that production.

RD: It was a co-production between HD Vision and Greene Productions and it was a ground breaking production if you ask me. We travelled throughout the regions of Texas in an RV in which all the bedroom furnishing had been ripped out and replaced with rack units and HD gear. We shot with first generation Sony HDC-500 cameras and recorded to Panasonic HD-D5 decks. HD camcorders hadn’t come out yet, so we were tethered to the truck using 300 meters of RGBS cable.

C.R. Caillouet [filmmaker and, today, the technical director of the Jackson Hole Wildlife Film Festival and Science Media Symposium] was in the RV, adjusting levels and making each shot perfect as we recorded, because there was no color correction in HD at that time either. I remember what a challenge it was to capture wildlife in its native habitat when capturing that footage required us to crank up a generator to power all the gear. I still think the images captured for that project are some of the best I’ve ever seen.

DCR: The entire wide screen motion picture production world is now all digital and you were one of the pioneers in making that a reality. Your vision and creativity helped pave the way. Can you possibly put into words what that means to you?

RD: It was an honor and privilege to be involved. I wasn’t afraid to risk it all because I knew this was the future of television. It was so much bigger than movies, sports and a cool technology. I knew HD would bring the world into our homes in way that cannot be ignored. What I couldn’t imagine 30 years ago was how incredibly important it would be for us to be able to humanize tragedy in the world we live in today.

DCR: When did you first fear that Randall had Alzheimer’s?

Kristen Cox: I’ve known something was wrong for a couple of years. Randall was losing weight and at a certain point, it escalated to a rate of about two-three pounds a month. He’s rarely ever been between projects for more than a month or two and it had been years since he had steady work. I thought he was depressed because his brother had recently passed away or perhaps due to him turning 60. Bloodwork and physical exams consistently showed no signs of illness. His personality started to change and his ability to solve simple problems evaporated. He also started hitting the walls of the garage when he tried to park his car. I asked him to see a neurologist and he agreed. About ten minutes into the appointment, the doctor looked at me and said, “We have a serious problem here.”

DCR: I can only begin to imagine the horror of that news for both of you. What was your first reaction? 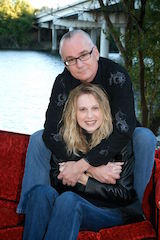 KC: We have a relationship that’s equal parts humor and affection. The first diagnosis we received was dementia. It took another two months to narrow it down to Alzheimer’s. When we got the dementia diagnosis, Randall’s opportunity to drive was taken away, as was his ability to work. [When the doctor said the word Alzheimer’s] I gasped out loud. It was like hitting a brick wall.

When we got to the parking lot, I looked at Randall and said, “I told you something was wrong!” He said “Yep. You did.…” We laughed for about half a second, then we held each other and cried, and cried.

DCR: What steps are you taking to deal with it?

KC: First and foremost, we deal with it by faith. We know God has a plan and a purpose even in suffering and uses all things for the good of those who love Him and are called unto His purpose. We have a circle of friends who have come around us and offer just what we need in perfect timing. Everything from an unexpected meal or visit, to a convoy of about 25 friends with their trucks, cars and trailers who moved us so we wouldn’t have to incur the cost. Randall is taking medication that can potentially slow down the progression.

DCR: Talk a little bit about your daily life.

KC: We’ve moved into a retirement community and we fill Randall’s weeks with structured activities that allow him to exercise his brain and keep him connected socially. A few years ago, I stepped out of the free-lance production world into a steady job as the Public Information Officer for the Travis County Sheriff’s Office. I’m gone during the day and we have a network of friends and family who keep tabs on Randall and drive him where he needs to go in my absence. Not every day is easy and some days we do this better than others, but overall, we’re finding our stride in our new normal.

Randall struggles with email at times, but does very well with texts and calls. I hope colleagues will stay in touch with him. He hopes that by being open about this diagnosis, he will help break stigmas. I hope that industry colleagues who may have drifted away due to strange emails or messed up communication in recent years will now have context for any issues and forgive the mistakes or misunderstandings.