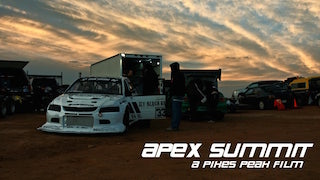 To capture the danger, excitement and beauty of a racing competition that has been around for a century a team of young, innovative and resourceful filmmakers and builders worked together to mold a story around an up-and-coming star in the motorsport field and give audiences a riveting, personal look at the Pikes Peak International Hill Climb.

The young team of 4-Pistons Media undertook the task of filming the incredible, sometimes arduous effort. Producer Andrew Montiveo recalled: “We’ve filmed automotive stories for three years, but we never dealt with anything close to what we witnessed at Pikes Peak: a 12-mile course that swirls around a 14,000-foot mountain. It’s incredible...and insane.”

Filmed in June 2015, the event saw numerous crashes, several injuries, one fatality, and volatile weather that shut down the race early. “Fortunately,” Montiveo added, “Canaan managed through a crash, lightning, rain and hail to reach the summit in a respectable time – unlike a third of the competitors who lost out because authorities shut down the mountain for safety reasons.”

It fell to cinematographer Darrell Nash Jr. to capture all the excitement. His first challenge was putting together a shooting package that could prove up to the task. Nash chose two BlackMagic URSAs, one Cinema 4K, a Sony FS-700 as back up, a Canon 7D DSLR, a dozen GoPros – and two sets of Schneider-Kreuznach Xenon FF-Prime Full Frame lenses. 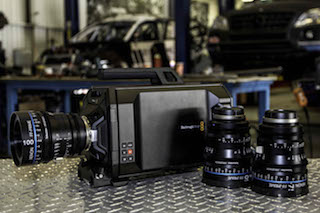 “We chose to use Schneider lenses because of their excellent reputation, value, and – essential on our project – light weight,” said Nash. “I can’t stress enough how important that attribute came to be while lugging around a 16-pound BlackMagic URSA on a 14,000 foot mountain. It felt better knowing that the Xenon FFs would be able to smoothly handle the expected fall-off in our over-and-under exposed areas. Our project wasn’t a simple studio shoot; it was a multi-week effort that involved run-and-gun shooting, as well as unpredictable weather, complex terrain, sudden obstacles and – on the other side – sudden opportunities for beautiful shots.”

It was a demanding shoot for the crew. Everything from driving up the mountain to taking positions was a difficult task, made worse by a mountain of equipment (cameras, tripods, batteries and more). “You have to lug around everything on your back while you trek up some narrow ledge,” he explained. “Four hours before call time is – maybe – just enough to get into place and set up for the shot. You just think, the shot better be worth it and these lenses better not fog up.”

“I’m relieved they never did – not once. That was a dream. Add to that the lenses’ uniform build, which gave our team a lot of convenience in what was often a difficult project. Swapping out lenses while on a Ronin, which we used often, was a breeze. When you are filming racecars, speed is of the essence. Luckily with the Primes, we could swap, mount, and adjust in as little as four minutes.”

Weather was a big obstacle. It seemed to pull a 180 every 15 minutes, going from bright and sunny to overcast. It was especially tough for Nash, as he was covering a white racecar. “We had to adapt quickly or else the car’s details were completely blown out,” he said. “In one of our unedited frame grabs, taken just before our subject takes off, the viewer can glimpse at how well the lenses handled the scene’s wide and diverse light range, all the while keeping the out-of-focus areas smooth. The shift from in-focus to out is gradual, not abrupt. ‘Smooth’ really is the right word.”

Nash also found the lenses’ compact and uniform design the instant choice for their run-and-gun gimbal shots – done with the Ronin and BlackMagic Production Camera 4K. “We did these types of shots often, since many of our subjects were on the move.”

Nash boiled the use of Schneider lenses down to a simple fact. “They are a terrific blend of quality and value. That sounds too simple, maybe sales-y, but it’s the truth. They were easy to mount, easy to carry, didn’t fog up, and yielded consistently beautiful images under the toughest circumstances. You can’t ask for more than that.”

Apex Summit will premiere June 22 at the Tim Gill Center for Public Media in Colorado Springs, Colorado.  The event is free to attend and includes food and beverages.