PS Production Services provided lighting, power, dolly and grip equipment for Deadpool, the comic book thriller from 20th Century Fox that opened internationally this month. PS supported the production during two and a half months of shooting on location in Vancouver. The shoot included a spectacular crash sequence staged on the Georgia Viaduct, near the city’s downtown. Deadpool smashed records, garnering $260 million at the box office worldwide for its opening weekend. 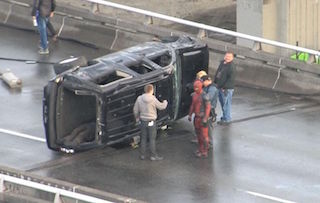 Deadpool production manager Michael Williams said that despite a production schedule that included a two-week closure of one of Vancouver’s major arteries, the shoot came off without a hitch. “The production community and the city really got behind this movie…far beyond what you’d expect,” he says. “There were a lot of like-minded people who contributed to making the shoot a success.”

Among them was PS Production Services. “PS is terrifically supportive and a pleasure to deal with,” observes Williams, who had previously worked with PS on numerous film and television projects.

“It was an ambitious, logistically challenging production, run with skill and efficiency adds PS Production Services general manager Jeff Ramsay. “They had some massive set ups on the viaduct. It was a pleasure to work with the production team of John Kelly (executive producer), Thane Watkins (associate producer) and Michael Williams (production manager).”

A Sim Group company, PS Production Services is Canada’s largest source for lighting and grip equipment. The company has many recent film and television productions through its Vancouver office, including the upcoming summer blockbuster Star Trek Beyond and the Steven Spielberg feature The BFG, due for release next fall from Walt Disney Pictures.