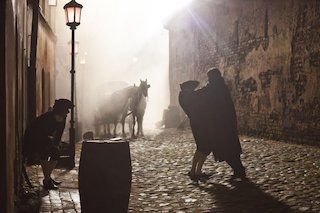 Vilnius, the capital of Lithuania, is rapidly becoming a crucial film production location in the region, officials there say, favored by both local and international production companies. The main reasons for the attraction are the Lithuanian Film Tax Incentive and the availability of high-level film professionals. Although the pandemic partially slowed down projects, the film industry in the city has been quickly restored, and 13 foreign feature films have already been shot in Vilnius this year.

The most recent project in the capital was the Welsh production of the feature film Prizefighter: The Life of Jem Belcher about the 19th century youngest boxing champion in the world. Having encountered the lack of funding in Wales, the production team, led by Matthew E. Chausse, the producer, decided to relocate to the Lithuanian capital for shooting.  It’s the second cinematic project in Lithuania for Chausse, who filmed the sci-fi feature film Skylines in Vilnius in 2019.

“We [were] excited to be filming Prizefighter in Vilnius. This is my second film project in Lithuania, the crew and hospitality are world-class,” said Chausse. “We are delighted to share this amazing project filmed in Vilnius.”

The Prizefighter was shot for 15 days in Vilnius and 17 days in Lithuania in general throughout this past August. As many as 100 people worked on the project, 80 of them being local professionals.

According to Kęstutis Drazdauskas, the executive producer of the film and founder of Artbox, one of the oldest Lithuanian film production houses, local production crews are fully experienced to tackle any challenges that may come their way when working on international projects.

“Sometimes the challenges are management-related, other times—creative,” said Drazdauskas. “When shooting Prizefighter, we had to recreate 19th century England, complete with specific architecture, and ambiance. It looked truly difficult at first, however, our team tackled the task admirably and astonished highly experienced partners by demonstrating ingenuity and a high level of professionalism.”

Aside from world-class cinematic professionals, the Lithuanian Film Tax Incentive is one of the main appeals for foreign production companies. It enables feature films, TV series, documentaries to have 30 percent of filming costs reimbursed if they fulfill several main criteria: at least 80 percent of production costs must be incurred in the country, with the minimum spending amount of €43,000.

Jūratė Pazikaitė, head of the Vilnius Film Office, says the Film Tax Incentive helps the capital to attract a number of foreign cinematic projects to Lithuania each year.

“Vilnius is fully prepared to accommodate the needs of foreign film crews, enable access to high-level professionals and a range of shooting locations, and facilitate the acquisition of filming permits,” said Pazikaitė. “Production teams come from the US and many of the largest European countries—Sweden, Norway, Finland, the United Kingdom, Germany, the Netherlands, to name a few. This year Vilnius and the rest of Lithuania were especially favored by the Scandinavian countries.”

Last year was a record-breaking year for the country. Thanks, in part, to the tax incentive, Lithuania  received around €27 million in income from foreign film productions. Also, around 95 percent of film productions either took place in Vilnius or were initiated by companies operating in the capital.

The capital has also made global headlines when several large-scale projects were shot in its streets during the past years. Netflix’s Stranger Things crew set up in the century-old Lukiškės Prison for Season 4 and HBO chose the residential district Fabijoniškės for the cult-favorite miniseries Chernobyl.