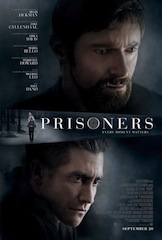 This is the best, most convincing work Jake Gyllenhaal has done and it shows the emotional range of talent Hugh Jackman has.  It’s a good story, inhumanely told.  It’s long, gruesome, and unnecessarily cruel. It will take you to dark places in your soul and leave you questioning what you’d do in the same situation.  This is a tough film to watch and even tougher to forget. And it has one of the very best endings of any film I’ve seen recently.  Of course, I may be in a minority for believing that because as I was watching the end credits roll, two young women passed me leaving their seats in the row in front of me.  One said to the other:  “Do you believe they would f***ing end a movie like that?”  Yeah, I do, because it was the best way to end this story after two and a half hours.  And don’t worry about the length; you may not notice all that time has passed because you heart will have stopped – several times – by what’s taking place on the screen. There are scenes in here that will tear at the edges of your heart, will numb you by their cruelty, and will hold you in their power. The writing is tight, but you have to pay attention.  Seemingly disparate elements weave in and out of the story and a medallion introduced early comes back to play a later role.  When the story is over, you will realize how much they’ve been telling you all along.