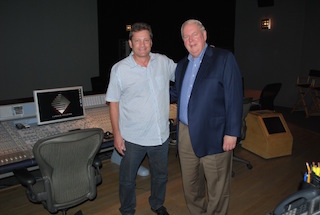 Independent post-production facilities Post Haste Digital and Larson Studios have joined forces to extend audio and video post-production services in West Los Angeles. As part of the arrangement, Hollywood-based Larson will operate the Main Stage in Post Haste’s Culver City facility, where the studio will service its Westside clients and also lend talent to Post Haste projects. Upcoming projects to be mixed in Larson’s new Stage 10 include Fox’s re-boot of the cult sci-fi series The X-Files.

“Larson Studios has an outstanding reputation for quality and a focus on customer service, making this collaboration a perfect fit. Our newfound affiliation will not only bring new talent and exciting projects to our Westside facility, but also expand our current slate of services,” said Post Haste Digital owner and president Allan Falk. “We’re very pleased to be working together.”

“I’m very excited about this new affiliation,” said Rick Larson, CEO and president of Larson Studios. “Allan and his team have built a fine facility in a terrific location, and we’re looking forward to expanding the Larson Studios footprint beyond Hollywood.” Mr. Larson continued, “This new relationship and our resulting presence will enable us to fill a void created by changes in the sound finishing world this past year.”

Post Haste’s Culver City facility is home to two re-recording and mixing stages, spacious ADR and Foley stages, two machine rooms and six editorial and mastering suites where the company has completed restoration, mastering, compression, authoring and a multitude of additional post services for projects like: Twentieth Century Fox’s 50th anniversary Blu-ray release of Lost in Space and NBC’s Blu-ray/DVD of the series Aquarius, among others. Larson’s new Westside stage rounds out nine existing stages spread across its two Hollywood facilities, from which the company has served as the post-production home for such shows as: NCIS: Los Angeles, Orange is the New Black, Hell on Wheels, Graceland, Last Man on Earth, Getting On and It’s Always Sunny in Philadelphia.