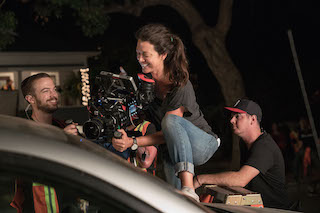 While trying to keep her boyfriend’s surprise birthday party on track, Katie’s day takes a drastic detour after picking her brother, Seth, and his daughter up. Realizing Seth has relapsed in his heroin addiction, Katie drives him around town trying to find a detox center that will admit him. 6 Balloons was written and directed by Marja-Lewis Ryan and shot by cinematographer Polly Morgan, BSC (Spinning Man, The Intervention) with VariCam 35 cameras. The Netflix feature film, which stars Abbi Jacobsen and Dave Franco, had its premiere at this year’s South by Southwest film festival in March and began streaming on Netflix in April.

Hailing from West Sussex in the south of England, Morgan always knew she wanted to work in movies. As a teenager, a film crew descended to the countryside she lived in and used her farmhouse as basecamp. After looking through the camera’s viewfinder for the first time, Morgan was hooked. “It was a really magical experience for me,” she says. “As I grew up, I got into photography and when I left university, I started working as a production assistant. It all kind of went from there. I was a PA, and then I was a camera trainee, and from there I moved to second assistant camera.” Morgan eventually came to Los Angeles to study cinematography at the American Film Institute.

Morgan got involved with 6 Balloons after her agent sent her the script, as well as a look book that Ryan had created. Morgan was impressed by both. “We met for coffee and after talking, we realized we were on the same page,” explains Morgan. “We agreed that the film had to be really raw and real. It couldn’t be glossy.”

For developing the look of 6 Balloons, Morgan was inspired by the work of still photographers like Nan Goldin, Todd Hido and Ryan McGinley, whose styles she describes as naturalistic and textured. “We didn't want the audience to be aware of the cinematography,” she explains. “We wanted the viewer to feel like they were on the journey with the two protagonists – a bystander forced to witness the events that unfold. We didn't want the film to look perfect, but to make it feel immediate so people could emotionally respond to the story and feel the sense of drama and panic unfolding.” 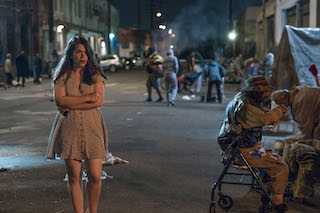 Like most indie films, Morgan’s biggest challenge was time, shooting the movie in four weeks with a three-year-old lead and a schedule full of night work, in and around a car in rough Los Angeles neighborhoods. The hardest part of the shoot was the final scene of the movie, in which Katie’s car fills up with water. “The end sequence shows our two main characters in a car as it fills up with water, a symbolic representation of Katie’s mental state,” explains Morgan. “We had to figure out how we were going to put these two actors in a car and fill in to the top with water in a safe and shoot-able way. We ended up with three versions of the same car: one to shoot in around LA, one to submerge in a tank and the other to seal and fill up with water at the actual location.”

With Netflix’s 4K mandate, Morgan selected the VariCam 35 and was excited about the camera’s ability to shoot at high ISOs. During prep, she shot day, night, interior and exterior tests at the actual locations they would be shooting at and created a show Look Up Table with her post house, Local Hero, in Santa Monica. “It was mostly about creating a natural palette with a low contrast gamma curve, so the film had a softness to it,” reveals Morgan.

With a small budget and a limited lighting package, shooting at a higher ISO really helped while driving around at night when Morgan wanted the lighting to be interactive. “We wanted to feel the real-world sources from the street – the passing cars, the ambience coming through the windows,” explains Morgan. “When we went down to Skid Row, it was all minimal lighting. We couldn't light expansively down the street. We didn’t want to disturb everyday life for those people living down there. We did it run-and-gun and we had to be very sly about it. Since the VariCam can basically see in the dark, it opens up a whole new world for what can be captured with minimal or no lighting” 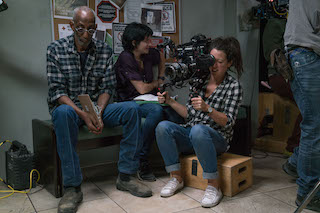 For lighting in the car, Morgan employed a process trailer and mounted Arri Skypanels to create the look of stop lights, which were a story point. There were no lights inside the car with actors, because Morgan wanted the lighting to be soft and subtle and to feel the changing colors on the actors faces from the outside. “The 5000 ISO really helped us capture great details in completely naturalistic situations,” continues Morgan. “I really think it helped to make the film feel more authentic. Skid Row is a very intimidating place to go at night and to experience how the people lived there was a really harrowing experience for the entire crew. It’s very sad to see so many people suffering as much as they do.”

Although Morgan shot at high ISOs for night scenes, she found the noise pattern when dialing down from 5000 base to 2500 closely matched the native 800 ISO. “You couldn’t really tell the difference between that and 800 and I was really impressed at how 2500 saw more than what the eye sees at low light levels,” explains Morgan. “Our aim was to infuse the image with as much texture as possible. There are plenty of flares and a lot of foreground, we were always shooting through or over things. As the movie gets more intense, there’s really no frame that you would call clean and I think shooting at a higher ISO fit the textural mandate perfectly.”

Morgan shot the film in 4K (4096x2160), capturing 12-bit 4:4:4 AVC Intra files to P2 cards. She also shot in anamorphic using Cooke Xtal Express prime lenses. “They're such beautiful lenses and they have so much character to them,” says Morgan. “It fit in with our textured painterly feel. We also used a unique vintage 55mm macro lens which was employed to create the feeling intimacy and claustrophobia.”

They framed in the 2:1 aspect ratio because Morgan felt true anamorphic 2.39:1 would be restrictive in the small space of a car and so did a digital crop on the widescreen capture.

6 Balloons was graded at Local Hero by colorist Leandro Marini. According to Morgan, the grade was very similar to what the dailies looked like. “It was really about managing consistency,” reveals Morgan. “The look was created in camera. All the varying color temperatures were maintained. The artificial and uncomfortable environments of downtown, or the pharmacy, compared with the safety and warmth of the incandescent light back at her house. We had done extensive tests and had good communication with Leo [Marini] throughout the shoot, so everything was in a pretty good place by the time we went in for the grade.

“Overall, I'm pleased with how the film came out,” concludes Morgan. “I think that the manifesto for the cinematography, to keep it raw and naturalistic, to help the viewer connect and empathize with the characters, was the right approach and something all departments worked hard to achieve.”