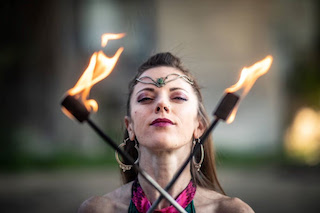 Flowing with Fire, a new 360-degree documentary short from director Michael Gabriele and Chicago production company Daily Planet, centers on a group of Los Angeles-area artists who engage in what has been called “a hypnotic form of dance combined with pyrotechnics.”

Viewers, equipped with virtual reality headsets or by clicking and dragging on a computer, can pan scenes and watch flow artists as they spin and twirl flaming batons.

Prior to the production, Gabriele conducted several tests to work out camera positioning, the staging of performances and other details to maximize the impact of the 3D spatial environment. As the film’s editor as well as its director, he had to work out a way to manage the massive files produced by the 360-degree camera system.

“We developed a workflow from scratch that allowed us to edit efficiently,” he recalls. “We also had to do a lot of digitally painting to remove the tripod and other production artifacts. Because the footage is not only 360-degree but also stereoscopic, we had to apply the painting twice for the left and right eye.” 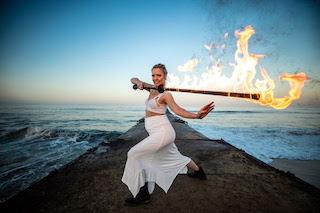 Flowing with Fire can be seen on YouTube and the VR platform Oculus TV.

“I suggest watching it on a headset to get the fully immersive experience,” Gabriele says. “The 360 media is a rich storytelling tool and I believe that it’s going to become more common and accessible. For me and Daily Planet, this project was great fun and it had us working at the cutting edge.”

The color grade was done by Jeff Altman and the graphics by Tim Berthiaume and James Lee.