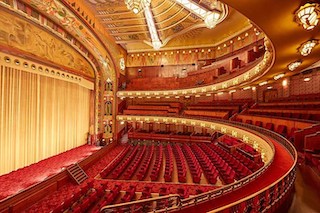 The Pathé Tuschinski in Amsterdam, which has been widely acclaimed as the most beautiful movie theatre in the world, celebrated its 100th anniversary last October. Pathé Tuschinski is regularly used for red carpet premieres and, with three more auditoriums added by the purchase of the next-door cinema in the 1980s, audiences can watch films in the luxury of its restored Art Deco interior, with plush seating, private boxes, love seats and at-seat delivery of food and drink. The cinema also boasts 21st Century sound.

Helping to keep the venue at the leading edge of Dutch cinema are its two Alcons Audio pro-ribbon systems. The first was installed in the 740-capacity main auditorium in 2013, on the recommendation of Cinemanext, the Liege-based pan-European cinema solutions company.

The installation needed a main system and subwoofers with a maximum depth of only 30cm/12”, but which could deliver the highest quality audio over 45Hz-20kHz for the mid/highs, with the subs down to 20Hz.

More issues were presented by the height of the auditorium, the two balconies, complex acoustics and the building’s historic status meaning no physical acoustic changes could be made. 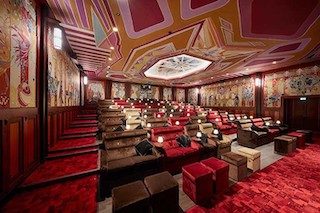 To meet these challenges, three units of Alcons’ CRA72cst were flown behind the screen, a dedicated version of the company’s Cinemarray pro-ribbon cinema line-array system. The CRA72 features nine RBN401, proprietary four-inch pro-ribbon transducers for high frequency reproduction from 1kHz upwards to 20kHz, plus nine 6.5-inch midrange and six 12-inch reflex-loaded loudspeakers for low frequencies. All components are acoustically spaced to form a very coherent wavefront, without any spikes or lobes in the horizontal and vertical plane. This is essential in a “historically listed” room that has limited possibilities for acoustical optimization.

The top HF section of the Cinemarray system can be switched off, to prevent unnecessary ceiling reflections when the second balcony is not in use.

The screen system is powered and controlled by 12 channels of three Alcons Sentinel3 amplified loudspeaker controllers. 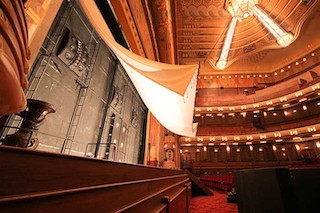 “Custom-made to the auditorium’s needs, the Alcons system was the only one that could deliver the necessary flexibility in the available space, while at the same time providing an unparalleled audio experience,” says Cinemanext general manager Matthew Jones.

As the projection booth is located above the second balcony, resulting in a very steep vertical projection angle, the screen is slightly tilted upwards to facilitate an improved projection. However, this results in a very limited space behind the screen. With a system depth of just 285mm/11.2-in, the CRA72 offers a full-range performance down to 45Hz without any compromise, as demanded by being an internationally recognised premier theatre.

This system was complemented by six CB181sl single 18-inch shallow subwoofers, with a depth of 275mm/10.8 inches, to also have the complete LFE system fit behind the screen.

The complete system was powered and controlled by six Sentinel3 (4 x 750W) and one 4 x 2500W Sentinel10 amplified loudspeaker controllers.

The main auditorium system proved so successful that, when the second screen at Pathé Tuschinski was reconstructed, updated and restored to its 1920s glory in September 2019, 12 Alcons 6,5-inch CRMSC-SRHV compact horizontal/vertical reference surround units were chosen.

Here art and acoustic technology were brought together by Liesbeth Stinissen’s stunning designs painted on acoustic canvases. The Alcons’ Architect Colour Option (ACO) program meant that the Alcons loudspeakers could be supplied in the RAL 2004 Pure Orange colour, making them fit discreetly into the décor.

“We have been very happy with both of the Alcons pro-ribbon systems since they were installed. They sound great and help to keep us at the very top of the Dutch movie market,” says Pathé Tuschinski manager David Hanemaayer. “It has been great to be able to celebrate 100 years of this wonderful venue and we hope that Alcons systems will be a part of it for many years to come.”