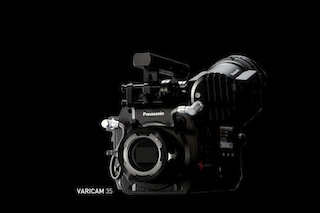 Panasonic has unveiled a 4K camera/recorder, VariCam 35 that incorporates a newly developed super 35mm MOS image sensor and the company’s AVC-ULTRA family of video codecs. The new camera handles multiple formats including 4K, UHD, 2K and HD and is designed for high-end filmmaking, and commercials and episodic production as well as live 4K events.

The 4K camera (AU-V35C1) is separate but dockable to the recording module unit (AU-VREC1), which is also interchangeable with Panasonic’s new 2/3-inch camera module unit (AU-V23HS1. This system flexibility can be expanded with an umbilical cable between the s35mm 4K camera and the AVC-ULTRA recorder, providing box camera functionality for jibs, cranes and other remote camera needs.  This common recorder module is also interchangeable with Panasonic’s new 2/3-inch 1080p camera, enabling professionals to switch between s35mm and 2/3-inch camera heads to best suit their creative needs.

Professional interfaces include:  3G-HD-SDI x4 for 4K QUAD output; 3G-HD-SDI x2 for RAW output; an HD-SDI out for monitoring (down-converting from 4K); and two XLR inputs to record four channels of 24-bit, 48KHz audio. A multi-connector facilitates docking the camera head to the recording module. The VariCam 35 also has a removable control panel to facilitate real-time control and easy access when the camera is in a fixed position. The VariCam 35 features a standard 35mm PL mount.

The VariCam 35 will be featured at NAB 2014 and will launch in the fall, with pricing to be announced.