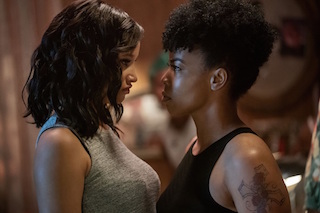 Based on a stage play by Katori Hall, who is also the series showrunner, P-Valley centers on the employees of a strip club named The Pynk. Looking past the grit and glitter, the show exposes the compelling, human stories of its diverse cast, who inhabit a world where existence is rough and beauty hard to find. Enthusiastically embraced by critics and viewers, the series was recently renewed for a second, 10-episode season.

While principal photography for the series was completed in the Atlanta area, nearly all the post work was done in New York, where Hall, her production team and editors (Agnes Grandits, Hye Mee Na, Ryan Denmark and Sky Gewant) are based. That enabled the production to tap into the state’s deep pool of post resources and world-class talent, and take advantage of the state’s generous tax incentive program. 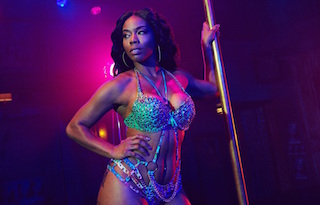 “P-Valley is a post-intensive show,” says series post-production coordinator Tiffany Brown. “And every aspect of it, including editorial, sound, color and visual effects, was managed through New York. We oversaw extensive [automated dialogue replacement] sessions. We tracked stock footage and music. We conducted background research involving the tiniest details.”

A key challenge affecting post lay in capturing the unique look, sound and vibe of the Mississippi Delta. “Although Chucalissa is a fictional place, we wanted to do justice to the Delta region in terms of how characters are depicted, how they sound and the way their world looks,” explains series producer David Woods. “The cast had an incredible ability to inhabit the dialect and mannerisms of people from the region and production did an outstanding job in finding locations that sell the idea of Chucalissa. When they handed it off to post, we took it and ran with it.”

One area where post helped enhance the Delta ambience was ADR. Goldcrest Post and Harbor hosted numerous recording sessions where actors created background dialogue and vocalizations for exteriors and for scenes inside The Pynk. Casting the voice talent was done by Dann Fink and Bruce Winant of New York-based Loopers Unlimited. “Dann and Bruce found amazing, Broadway actors who were able to match the dialects voiced by the principal cast,” recalls Woods. “Katori knew many of the actors, some who had performed in her plays. ADR editors Kris Chevannes (Goldcrest Post) and Bobby Johanson (Harbor) did a fantastic job in blending their voices to create the crowds in the club.” 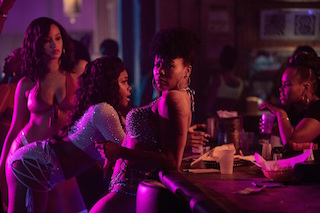 Custom sound design was also deployed throughout the series to create the distinctive sonic environments of the club and other locations. Sound editorial and mixing was centered at Technicolor PostWorks under a team led by supervising sound editor John Bowen and re-recording mixer Chris Foster. “The club is old and ramshackle, and it has a distinctive rattle,” says Woods. “Chris and John blended the sounds of a chiropractic massager, glass bottles and other objects into musical cues to simulate the reverberating building. When we are in Uncle Clifford’s office, you can hear music from the stage booming through the walls and floors. It was a cool effect that they manipulated to support the story.”

Sound also helps to underscore the human element behind some of the show’s phenomenal dance sequences. Brown points to a scene from the first episode where Mercedes (Brandee Evans) performs a gravity-defying routine that involves hanging upside down from the top of a pole. “Chris came up with the idea of depicting that moment from Mercedes’ perspective,” Brown explains. “The music and crowd noise fades and all you hear is her breathing. It captured her athleticism and artistry, and had a powerful effect on the audience.”

Alchemy Post Sound added to the Dolby Atmos mix by creating Foley sounds from different perspectives to support pole dancing, costumes and actors’ performances.  “The level of detail and authenticity is something you don’t often find in a television series,” says Woods. “They even nailed the squeaks of the pole. It’s almost like another character in the show.” 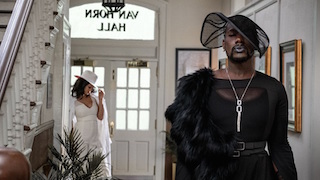 The Molecule’s contributions were similarly diverse and far-reaching. While many visual effects are invisible, the studio was called upon to create several fanciful visuals with memorable impact. One occurs in Episode 6 and involves a sequence where Mercedes and Autumn draw a large amount of cash from a bank and head off down a highway in a rattletrap car. The money, stuffed in a leather bag in the back seat, is picked up by the wind and bills start flying from the windows.

Woods points out that, while viewers may not notice, the scene is largely a digital creation. “The scene ends when a $20 bill, with Harriet Tubman’s face, fills the frame,” he says. “It’s pretty cool, and almost fully [computer generated]. A lot of work went into that.”

Final post-production finishing was done at Harbor. That included high-resolution color grading by Roman Hankewycz. He worked closely with Hall and series cinematographers Nancy Schreiber and Richard Vialet to finalize a look that captures the world of P-Valley both physically and emotionally. “It’s meant to look gritty, but also beautiful, and the look achieves that,” Woods insists. “The characters lead challenging lives, but you also see their beauty.”

Given the dimensions of the project, it was a huge advantage to be working in New York with a group of vendors near one another. “We all felt that this was the hardest work we’d ever done for a show,” concludes Woods, “but it was also the most gratifying.”