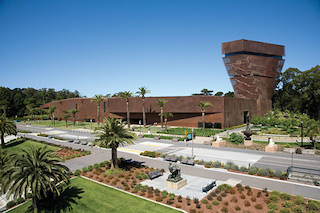 In a reverse twist on the silent movies of old, The Companions: A Lost Screenplay is a film without moving images. Or, as described in accompanying notes from the de Young Museum in San Francisco, the sound installation becomes “a type of auditory cinema that explores the vital role sound plays in shaping narrative and affective space in film.” The 20-minute work, presented in the de Young’s iconic observation floor (one of the free spaces within the museum), couples sweeping 360-degree views of the city to a soundtrack of music and sound effects as reproduced through a 24-channel system of Meyer Sound loudspeakers.

The Companions: A Lost Screenplay was conceived by artist Anthony Discenza, who had unearthed scriptwriter Carol Montana’s 1980s screenplay and was drawn into its impressionistic mix of film noir and psychological thriller. With a story line set in San Francisco, the script had been optioned but never produced.

Discenza, the first commissioned artist to present a work in Hamon Tower, enlisted two noted sound designers from nearby Skywalker Sound, Gary Rydstrom and Josh Gold, to produce the evocative soundtrack. The unconventional notion of ‘auditory cinema’ proved conceptually and technically challenging. Rather than working to a rough cut of a film, Rydstrom and Gold had to create sound that would suggest visuals and actions for a narrative as outlined by Discenza — here taking on the role of the film’s director.

“On one level my job was exactly the same as always, to support the narrative,” says Gold. “That’s because movies are inherently visual experiences, whether the scenes unfold on the screen or, as here, in one’s imagination. I just had to tune into my own brainwaves any time I needed the answers that the visual elements usually provide.”

Many sound elements in the storyline were gathered from dedicated location recordings around San Francisco, perhaps most notably the 4,500-pipe Skinner Organ at the Legion of Honor, the other museum operated by Fine Arts Museums of San Francisco. Rydstrom and Gold also drew on Skywalker Sound’s own vast library of sounds for the 1,500 discrete elements in the work, including cable cars, foghorns and seagulls. Most sound selection and editing was done in Skywalker’s editorial studios using Meyer Sound’s compact Amie monitors, with the final pre-mix at the studio’s David Lean Mix Stages with monitoring by Meyer Sound Acheron screen loudspeakers, HMS-10 surround loudspeakers and X-800 subwoofers.

The pre-mix, recorded on Pro Tools and encoded in the DTS-X immersive sound format, was then taken to the Hamon Tower for the final mixing. The custom playback system was two mirror-image systems, each with LCR main channels and surrounds, as the action shifts from the south end, over to the north, then back to the south during the course of the movie narrative. The entire dual system comprises 12 Meyer Sound HMS-5 surround loudspeakers, six MM-4XP miniature loudspeakers, and six MM-10XP subwoofers.

“The technical requirements of the exhibit were for a playback system able to deliver a dynamic, full-frequency range, immersive cinema experience with a minimal visual impact on the space,” says Skywalker Sound’s Brian Long. “The Meyer Sound loudspeakers were selected based on their ability to fulfill the technical performance requirements within a low-profile visual aesthetic.”

According to Gold, the effect of the soundtrack translated very well from the studio into a non-cinematic acoustical setting. “The results achieved with the Meyer Sound system are fantastic,” he says. “This had everything to do with the collaboration between Skywalker and the engineers on the Meyer Sound team. Also, fortunately, the glass-walled environment was kinder than I had expected it to be.”

Gold singled out the effect of the Skinner pipe organ scenes. “That’s my favorite sound on the Meyer playback system,” he says. “It lights up the glass room in a rich and pleasing way. It’s an amazing instrument.”

This is the first step in a multi-year partnership whereby Meyer Sound professionals will work directly with the Fine Arts Museums of San Francisco. Elizabeth Thomas, director of public engagement, Fine Arts Museums of San Francisco, comments: “Collaborating with Meyer Sound allowed us to craft the richness of a cinematic sound environment so integral to the success of this unique project. We are excited to keep collaborating with artists to create compelling sound installations that make use of this amazing space, with Meyer Sound on board to augment our technical capacity.”