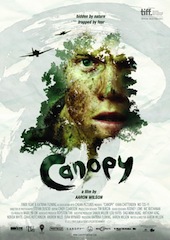 Odin’s Eye Entertainment has announced that the critically acclaimed independent survival drama Canopy will be mixed and released in the Dolby Atmos cinema sound platform.

“Dolby Atmos opens up another dimension in sound that is incredibly exciting and creative. It gives me the opportunity to enhance the world my characters live in on screen and delivers to the audience an amazing experience. There is also the ability to embellish theme, character, and story with a powerful sonic experience only Dolby Atmos can provide,” said Aaron Wilson, writer and director of Canopy.

The Dolby Atmos mix, to be produced by Melbourne-based Soundfirm, will be the first local feature mixed in Australia. Rerecording mixers Chris Goodes of Soundfirm and Doron Kipen of Music and Effects will create the Dolby Atmos version of Canopy.

“Canopy is the perfect film to highlight the sound capabilities of Dolby Atmos and is a wonderful example of how object-based sound can play an integral role in independent filmmaking,” said Doug Darrow, senior vice president, cinema, Dolby Laboratories.

Michael Favelle, the founder of OEE said, “Dolby Atmos is an incredible leap forward in cinema sound, and I am certain it will take Canopy to a new level of immersive storytelling.”

Canopy will be available in select Dolby Atmos equipped theatres worldwide, with theatrical releases confirmed in Australia April 24, North America, and the United Kingdom, with additional release dates and territories to be announced.

Produced by Finer Films and Chuan Pictures, Canopy debuted as an official selection at the Toronto International Film Festival in 2013 and has since appeared at major festivals including Busan, Abu Dhabi (Competition), and Rotterdam.