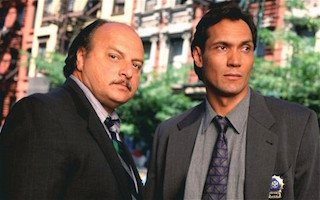 In a project for 20th Century Fox spanning nine months, Roundabout Entertainment restored and remastered the first eight seasons of the classic procedural police drama NYPD Blue. More than 170 one-hour episodes were scanned and finished in 2K, restoring the show to pristine quality for a new domestic release.

Reassembling episodes to conform to the series’ original broadcasts proved complicated as the cut negative often did not entirely match videotape reference copies of what actually aired. Senior colorist Michael Smollin, who led the restoration project and worked on the original series in the 1990s as a young assistant, explains that the discrepancies were the result of last minute editorial changes.

“The producers often brought in alternate takes to be inserted during post-production finishing,” recalls Smollin. “We’d put the new material on a telecine and color correct it so that it could be integrated into the video master, but those scenes were not cut back into the negative.” 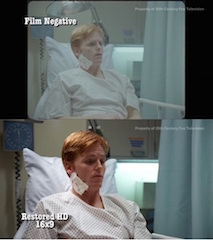 Smollin and his crew found missing scenes by combing through original production dailies. They used a Steenbeck flatbed film editing system to view 20-year old film elements and match them against video reference. When missing scenes were located, they were scanned at 2K, restored, color graded and integrated into the new masters. Similarly, camera moves, resizing and repositioning originally applied to stock images had to be recreated during the remastering process.

All of the material underwent a scrupulous digital process of removing dust, scratches and other artifacts conducted by Roundabout’s restoration experts using MTI Film’s DRS Nova. During the color grading process that followed, particular attention was given to replicating the gritty, cinema-verite look of the series—one of its signature elements.

“Keeping the look consistent and faithful to the original was a significant challenge,” says Zorn. “The show was meant to look run-and-gun and some scenes were quite dark. We wanted to preserve those moments while keeping it all in a flow and without sharp changes that might be shocking to the eye.”

“They took a lot of risks,” agrees Smollin. “They did a lot of exterior shooting with Steadicam. Many of the police station environments were low light. The cinematographer was going for a natural lighting environment. We worked hard to match that look, and once we had it, we carried it through all eight seasons.”

Smollin says it was fun and fascinating to revisit the show 20-plus years after its debut. “Our restoration process was essentially the reverse of what was done back then in post-production,” he says. “They started with dailies, went to offline, then cut the negative, color corrected it on a telecine, and finally mastered to video. We scanned first, then color corrected, and then sent it to editorial.”

Both the sound and picture crews operated under a tight timeframe. “We established an aggressive schedule in order to meet a domestic television airdate, completing eight seasons in less than nine months,” says Roundabout executive director mastering and restoration Ron Smith.

“It was a very collaborative project,” adds Zorn. “Our whole team worked together and gave maximum effort to get the look right and deliver on time.”