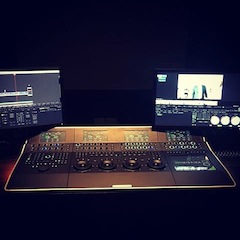 WorleyWorks became the first New York studio to invest in Mistika. They added a second system earlier this year, and have now integrated Mistika and new panels into their workflow. The company's two Mistika systems play a vital role, where one is used as the predominant client-facing Hero suite and the second for back-ups or on set purposes. WorleyWorks has created a niche in the feature film and commercials markets by working with some of the world's most creative directors such as Sharmeen Obaid Chinoy and Ang Lee, where they produced one of the country's first High Frame Rate-Stereo 3D-2K 60p workflows.

Jack Reynolds, WorleyWorks' DI colorist said, “The precision panel is the final piece of the puzzle for us, the real-time performance of Mistika has always been a massive asset when working against tight deadlines, when you combine this with the added tactile control and custom mapping features of the precision panel, you create an environment where creativity and efficiency can coexist. The more efficient our pipeline, the more time we have in the color session to create beautiful images and the happier our clients are on completion.”

CEO and co-founder Greg Worley added, “SGO's Mistika technology has always bucked the trend and delivers performance and functionality that other systems struggle to match. Although other manufacturers boast of competent tools, Mistika's vast 2D and 3D feature-sets, in our view, far outshine the competition in helping us to post produce exquisite images.”

“WorleyWorks continues to lead New York post,” said CEO Colin Ritchie of SGO's North American reseller partner, AArmadillo. “With their Mistika, they can now offer Extended Dynamic Range/Dolby Vision as a delivery format if required. The delivery of the Mistika Precision Panel will increase efficiencies within the suite, multiple palettes, effects and layers can be applied simultaneously and remain completely interactive during the session. Greg is a great customer, he knows the Mistika team is focused on the tools that will keep WorleyWorks at the bleeding edge of this industry with unparalleled rendering speed and tools that deliver 99.9 percent of the creatives' requests.”

Geoff Mills, SGO's director of global sales and operations said, “WorleyWorks' appeal is their fresh approach to the complete post production service including adept color grading and creating unique looks. Mistika's credibility and ability to work with 4K material in real time, from RAW camera footage is a real advantage. As a boutique business they felt it was important to have the most efficient grading functionality available in order to meet the various challenges. Mistika's exciting future-proofing attributes are an important consideration to WorleyWorks and we are delighted to see their investment reap growth and success now and for many years ahead.”

Founded seven years ago by Greg and Minah Worley, WorleyWorks has developed a reputation in New York for attracting high-end commercials and feature film work. The company provides bespoke services in 2D, HFR, stereo 3D, and 4K post production, including DI color grading and compositing, high-speed lighting, for clientèle that include Paramount, Universal and Viacom.