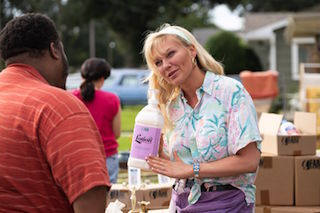 The goal of the filmmakers behind the Showtime series On Becoming a God in Central Florida was to create a softer look to tell the 1992 story of Krystal Stubbs (Kirsten Dunst), a minimum-wage water park employee who lies, schemes and cons her way up the ranks of Founders American Merchandise (FAM) — the cultish, flag waving, multi-billion dollar pyramid scheme that drove her family to ruin.

“We shot wide open most of the time, mostly with the 40mm Cooke Panchro/i Classic to give me the softer look,” explained cinematographer Tobias Datum. “We used Sony Venice cameras at 3.8K for television’s 16:9 aspect ratio.  Inherently, digital images are very flat dimensionality. With the Panchro/i Classics, there’s a falloff of sharpness towards the edges that I really like and that helps give the image more depth.”

Datum had met Charlie McDowell, who directed the pilot (as well as another episode in the series) a few years ago and they liked each other’s work. When this project came up, the two began talking and exchanging photos of the period.

“We didn’t have a lot of time to test, and spent most of it getting used to the Venice camera,” said Datum.” But I knew, having used Cookes for decades that I wanted to try the new Panchro/i Classics. One nice feature is the close focus of the 32mm and 40mm. We designed a lot of moving shots that go from close up to wide and back onto something close. That was a great thing.”

His Panchro/i Classic kit consisted of 10 primes from the 12 primes available in the family: 18/21/25/32/40/50/65 Macro/75/100/135mm. The lenses all incorporate Cooke’s i/ Technology metadata system to provide detailed lens data to visual effects and post-production teams. 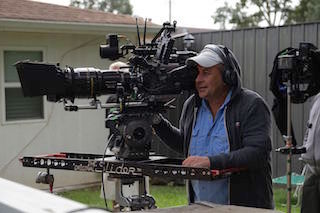 “The 40 was definitely our workhorse,” said Datum. “The 40 is just so beautiful: the idea of being physically close and turning the shot with a pan into a two-shot or showing the environment is nice. And it gives the perfect balance of the softness of the edges when shooting wide open, with a very gentle curvature. The 65 Macro ended up being a great lens for close-ups.”

The story of the show revolves around a cultish pyramid scheme and there were a bunch of scenes in event settings with a follow spot and theatrical lights. “When shooting into the lights the lens, the Panchro/i Classics, have beautiful flares and bokeh and a beautiful texture to the image. Cooke lenses are very gentle to the skin and actors. The softness and warmth of them is something I really appreciate.”

The industry shift to digital acquisition has also had an impact on Datum, with considerations to how the image will be presented and on what type of screen.

“In the absence of film stock, there is more of an emphasis on glass,” he said. “It is an exciting time for optics.  One of my tasks as a cinematographer is to make something two-dimensional appear as three-dimensional as possible and part of that is “destroying” the slickness of the digital image. Cookes are some of my favorite. They look great and are very user friendly.”

“Today’s Cooke Panchro/i Classic primes are true to their heritage,” said Cooke Optics chairman Les Zellan. “And while we’ve recreated the same look and feel of the original, cinematographers get the advantage of modern glass mounted for today’s cameras, plus the /i Technology lens metadata system that enables productions to save significant time and money in post. So, users get yesterday’s beauty with today’s workflows.”

On Becoming a God in Central Florida is produced by Sony’s TriStar Television and premiered in the U.S. on Showtime on August 25.