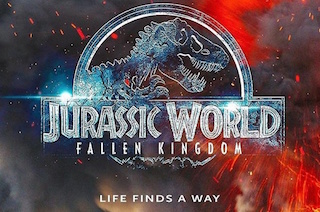 This edition will be available for free to Jurassic World: Fallen Kingdom ticket holders. The Regal mobile app will continue to host Moviebill’s image-recognition technology, which brings the AR content to life for more than nine million users. The Jurassic World issue is released on the heels of the app’s initial launch for Avengers: Infinity War, when one million copies were distributed within three days; the app has achieved close to three million scans to date.

Moviebill’s editorial team has been working in tandem with Universal to create an edition that celebrates the franchise and provides an unparalleled experience using augmented reality technology paired with in-depth commentary. 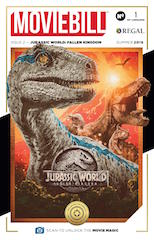 The Jurassic World: Fallen Kingdom Moviebill will feature exclusive interviews (in print and AR format) with star Bryce Dallas Howard and director J.A. Bayona, along with an AR welcome message from star Chris Pratt. The interactive centerfold activates a premium AR experience that allows fans to enter a dino-lab and bring to life an array of 3-D dinosaurs.

The experience includes a sample of the dinosaurs that players can collect and battle in Jurassic World Alive, the location-based AR mobile game developed by Ludia, in partnership with Universal. The edition is packed with stories and film insights from cast and crew across 28 pages of collectible content and games.

Universal Pictures commissioned the cover art exclusively for Moviebill, which also includes other exclusive illustrations and images such as a never-before-seen image of filmmakers and the cast on set of the original Jurassic Park.

“Jurassic World: Fallen Kingdom is the most immersive Jurassic film to date,” said James Andrew Felts and Matthew Shreder, co-founders of Moviebill.  “We can’t wait for fans to see what we’ve put together and be able to experience the magic of bringing dinosaurs back to life.”

Moviebill’s next edition will be for Mission Impossible: Fallout in July.