A New Era for Twickenham 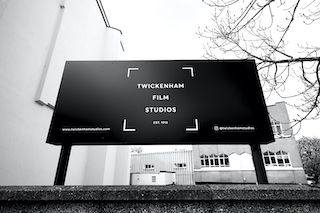 With a heritage that dates back more than 100 years, Twickenham Film Studios has recently gone through a much-needed £15 million renovation. The time seemed right, and its top executives led by managing partners Piers Read, Jeremy Rainbird and managing director Cara Sheppard wanted to signal a new era for the business by redesigning the brand in line with the site's redevelopment works. The full rebrand has been an opportunity to position TFS as a creative home for filmmakers.

Now operated by Time + Space Studios, TFS is a technical innovation hub for creators, with facilities across studios, picture and sound. With artists who work collaboratively with their clients to bring storytelling to life, across post production and production, working from script to screen. Talent includes sound re-recording mixers, sound editors and Foley artists, colorists, online editors and VFX artists. As well as a workspace membership and social client services team.

As part of the ongoing redevelopment works (backed by General Projects, British Airways Pension Fund and development managed by the Creative District Improvement Co), the the studios campus is being architecturally designed by Holloway Studio and Studioshaw with the new rebrand created to compliment. The new brand world now extends across all new signage, a new entrance, reception area and extensive renovations of the sound theatres ahead of the next phase of works. 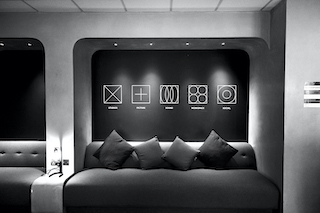 Matt Burke of Design Agency Almighty says, “We were privileged to be invited to work on the rebrand of such an iconic location. We met the TFS team to understand their ambitions and were lucky enough to be able to spend time on site as well. This helped give us a real feel for the place and its history. We were briefed to evolve the brand whilst retaining their 100-year heritage, so we wanted to ensure their state-of-the-art facilities, creativity and world-class content was the main focus of the new identity. This is where the viewfinder idea came from. A suite of supporting icons for key facilities were also created which interact with digital and physical areas of the campus. A lot of the movies made at TFS are timeless classics, so it was a conscious decision to keep the identity predominantly monochromatic to reflect this. There’s confidence in its simplicity. We hope the new identity will support and elevate the brand for many more years to come.”

A fully enhanced Twickenham Film Studios Sound Theatre 2 has also been unveiled with Sound Theatre 1 to follow - both include an extensive renovation and technical upgrade as part of the site redevelopment works making them the most state of the art, technically advanced Sound Mixing Theatres in the UK. The exciting changes for both TFS Theatre 2 and Theatre 1 include: structural changes to the design and layout, with Theatre 2 remodeled to improve its acoustics and eye-lines to the screen. They have created a very beautiful, modern, comfortable, dark look interior design with a palette of black and wood. The new Sound Theatres feature comfortable new sofas, bespoke desks, sound artist seating and editor areas. They are also upgrading the surrounding areas to our Sound Theatres to showcase the new TFS rebrand elements. The improved tech install includes: Neve DFC 3D consoles with integrated Avid S6 M40s in both rooms, plus the addition of new pro-tools rigs. The addition of Dolby Atmos means that both theatres now offer immersive audio. Imax 12.0 has also been installed in Sound Theatre 2. 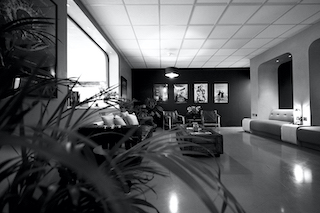 Twickenham Film Studios managing director Cara Sheppard says, “As part of the site works across the infamous TFS campus in St.Margarets, the studios are undergoing a complete redesign and redevelopment. A time to embrace our creative community, innovation, and technology, building on over a century of film heritage. The important changes and expansion of the studios means we are perfectly placed to welcome even more productions, filmmakers, and creators who will call the new campus “home". The new rebrand we are so proud to unveil runs across all our digital, and physical platforms goes hand in hand with all the physical enhancement of the campus we are going through. We are investing into our infrastructure, our cutting-edge facilities, our talent, our brand ethos and values, the importance of advanced technology and innovation as well as our studios sustainability, diversity, and inclusion practices. The new brand designs not only talk to the heritage of the business but our relevance in the next chapter. We look forward to welcoming a range of productions as the content revolution goes from strength to strength.”

TFS consultant marketing, PR and brand director Victoria Poole adds, “Coming on board six months ago to lead the marketing rebrand and being able to proudly unveil today our new TFS positioning across all digital, physical, merch, assets, site and beyond is such a proud moment. The team at Twickenham Film Studios are a hugely talented family and resetting the future look of the business has been a great challenge. I couldn’t be any happier with what we have brought to life together. There are no studios out there offering the core capabilities, site experience, vision, and talent that TFS does. The new brand world we have created with Almighty, Fresh Pies and EndPoint truly reflects that. This rebrand also showcases the real investment the business is making into the next era, so as to support the healthy future of the UK Film and TV industry.”

Twickenham Film Studios reputation has been based on creating such heritage work as The Italian Job, Zulu, Alfie, The Pink Panther Strikes Again, Iron Lady and War Horse through to such Oscar wins for sound mixing on Bohemian Rhapsody and a Bafta for mixing on Sam Mendez’s World War One drama 1917. Other productions that have used the production and post-production facilities include: Baby Driver, Netflix’s The Witcher, ITV’s Belgravia, ITV’s The Durrell’s and more recently such highlights as News Of The World for which TFS Re-recording mixer Will Miller was Oscar nominated for Best Sound, The Hustle, The Crown, I Care A Lot, The Duchess, Enola Holmes and The One & Only Ivan.