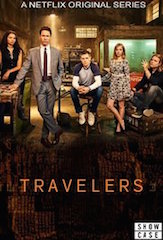 Travelers debuts December 23rd on Netflix, which will have exclusive international rights everywhere except in Canada, where it has already begun airing on Showcase. The original series is being released in 4K UHD.

Kidd’s lighting and cinematography gives each of the five travelers a look to help define the persona they have acquired and make them slightly alienated from the world around them. “It’s a subtle way of telling the audience what this character is like and setting the mood of the person,” said Kidd.

“We started production in Vancouver on April 19, and from day one, I shot the characters fully open giving a shallow depth of field so they seemed liked they didn’t belong,” Kidd explained.  “I wanted a somewhat gritty look with a European flavor. By combining how I light and see the world with the ‘Cooke Look’, I captured a more naturalistic image. That’s important as Travelers is mostly set in a contemporary world and needs to feel natural to the viewer.” 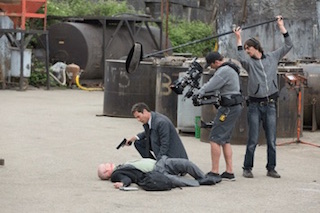 Kidd created the look for Travelers and shot the first three episodes, turning the remaining nine episodes of season one over to Stephen Jackson, who was DP for 104 episodes of Once Upon a Time. Cooke lenses have always been Kidd’s first choice for shooting dramas. “There’s no other glass available that gives such a cinematic image,” concluded Kidd.

In 2014, Kidd won the Primetime Emmy Award for Outstanding Cinematography for a Miniseries or Movie for the Sherlock episode “His Last Vow”, shot with Cooke 5/i primes.

This year he was nominated for the American Society of Cinematographers’ Outstanding Achievement Award in the category of Regular Series for Non-Commercial Television for the TV series Outlander, shot with Cooke S4/i prime lenses.

Starring Eric McCormack (Will & Grace and Perception), Travelers is set in present day as the last surviving humans from hundreds of years in the future discover how to send consciousness back through time, into people of the 21st century. These five travelers assume the lives of those people just before they die, while attempting to save humanity from a terrible future.

Travelers is produced by Peacock Alley Entertainment in association with Showcase and Netflix.