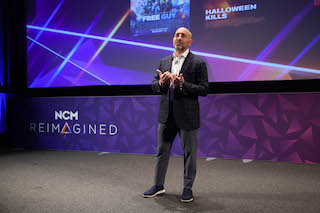 National CineMedia today announced the launch of one of the largest data-driven technology platforms for moviegoers, NCMx. The new data, insights, and analytics platform uses the company’s comprehensive knowledge and extensive data about moviegoer behavior to connect brands with custom audiences in theatres as well as on digital screens before and after attending movies. The announcement was made today by Scott Felenstein, NCM’s president, sales, marketing and partnerships, during the company’s upfront presentation for advertisers at Lincoln Center's Walter Reade Theater in New York City.

With moviegoers frequenting theatres regularly in numbers that exceed the highest-rated TV programming, marketers can now leverage NCM to execute advanced audience-matching against key geographic, behavioral, and contextual targets on the big screen, as well as use the NCMx capabilities to retarget moviegoers with digital ads and mobile offers. NCM provides marketers access to one of the largest collections of deterministic moviegoer data in the industry. With more than 274 million data records, NCMx gives brands a 360-degree view of recent consumer behavior with performance metrics to refine campaign plans and generate a better return on their advertising investment. Neustar, Catalina, Affinity Solutions, PlaceIQ and ElementalTV are partners in the new NCMx targeting and attribution technology platform.

Nearly one out of every two adults who visited a movie theatre in the fourth quarter of 2021 and the first quarter of 2022 were 18-34-year-olds, and 79 percent of moviegoers attending an NCM theatre are under the age of 39. “Declining audiences on linear TV and the extensive cord-cutting driving streaming, especially among ad-skipping, younger audiences, has forced clients to look for alternative options,” said Felenstein. “Movie theatres continue to attract and capture the undivided attention of this highly desirable 18-34-year-old audience en masse. With NCMx, cinema is now more targetable, measurable, and accountable than ever before, offering brands highly customized, hard-to-reach audience segments with clear business outcomes.” 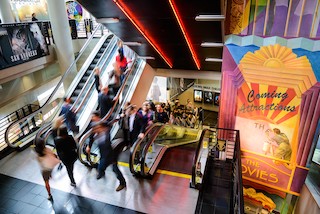 The Noovie Trivia Show, starring Emmy-winning entertainment host and long-time Noovie personality Maria Menounos, has been added to the NCM pre-show experience, alongside the recently announced Noovieverse, Perri’s Picks and Noovie Unwind series. Debuting in theatres in June, The Noovie Trivia Show will expand on the popular cinema tradition of testing moviegoers' knowledge of films, filmmakers, actors, and the people influencing pop culture. Menounos’ role within the Noovie pre-show has also expanded with the addition of the new recurring series. She will be seen in conversation with celebrities and influencers, quizzing them about popular entertainment. Moviegoers can play anytime through NCM’s exclusive Noovie Trivia app.

Menounos’ upcoming guests for The Noovie Trivia Show include actress Abby Ryder Fortson who stars in the iconic role of Margaret in the film adaptation of the beloved Judy Blume book, Are You There God? It's Me, Margaret.  The film also features Rachel McAdams and Kathy Bates and will be released by Lionsgate this September. 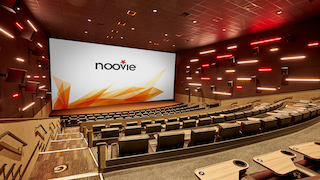 Menounos will also interview CFDA designer Christian Siriano who launched his eponymous collection in 2008 following his studies in London under Vivienne Westwood and Alexander McQueen. Known for whimsical and show-stopping design, Siriano’s collection has been worn by current FLOTUS Dr. Jill Biden, former FLOTUS Michelle Obama, Angelina Jolie, Oprah, Zendaya, Ariana Grande, Lady Gaga, Tiffany Haddish, Billy Porter, and Cardi B to name but a few. Siriano was named among Time’s 100 Most Influential People for his leading contributions on body diversity on the runway and red carpet, and recently returned to Bravo’s Project Runway in the role of mentor.

Finally, she will interview actress, model, and author Garcelle Beauvais who is currently a cast member of the reality television series The Real Housewives of Beverly Hills, co-hosts the daytime talk show, The Real, and is the author of Love Me as I Am (to be released on April 12, 2022). 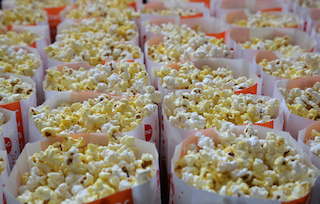 NCM is also expanding beyond movie-themed content to embrace broader cultural themes, important causes, and consumer passions. Two new partnerships lean into this cross-section of Hollywood and culture:  ATTN:, a media company and creative agency that bridges entertainment with topical issues moving social-first audiences toward positive change, and Tastemade, a modern media company that creates award-winning video content and original programming in the categories of Food, Travel, and Home & Design. Both companies will produce new Noovie pre-show content in collaboration with NCM and participating advertisers.

The new, interactive ATTN: and Tastemade Noovie segments will tap into the culturally relevant subjects that matter most to millennial and Gen Z moviegoers, including diversity and inclusivity, sustainability, civic engagement, travel, and home cooking, among others. Brands will be able to connect with and engage NCM’s young, diverse audience on screen, through QR codes, and via the partners’ strong social, digital and OTT platforms for solutions-oriented storytelling that entertains, informs, and engages audiences.

“The evolution of the Noovie pre-show forges an even stronger connection with our core consumer audience of 18-34-year-olds that advertisers most desire to reach,” said Amy Tunick, NCM’s chief marketing officer. “We are focused on expanding into new avenues of storytelling about pop culture and the passions that matter most to our millennial and Gen Z movie fans. Our advertising partners can access the myriad content opportunities tied to our new ‘shows’ within the pre-show, along with memorable activations around the unique shared human experience of going out to the theatre with friends and family.”