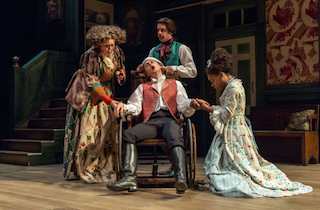 This season’s acclaimed staging of The Beaux’ Stratagem, broadcast by National Theatre Live, promises a sumptuous spectacle for Vue cinema audiences across the UK. A special performance of the 18th century comedy is being captured by Sony PMW-F55 4K cameras. Vue cinemagoers attending exclusive encore screenings on September 17th will enjoy a performance reproduced faithfully by a fleet of Sony 4K projectors across Vue’s 84-site estate.

“The F55 reveals huge amounts of detail and color, making it an optimal choice for this fabulous production of The Beaux’ Stratagem,” said Christopher Mullins, Sony Digital Cinema 4K product manager. Together with the high dynamic range captured by the camera’s large Super 35mm CMOS sensor, this all adds up to a vivid, lifelike document of the on-stage performance. Projected as a 4K DCP at Vue cinemas, it’s a truly spectacular experience for audiences.”

The on-stage action is being captured in the auditorium of the Olivier Theatre with six F55 camera chains that include Sony’s BPU-4000 baseband processing unit and CA4000 Camera Adaptor.

4K images from each camera are carried via fibre to NEP Visions’ OB truck, where they’re routed into a Sony MVS-8000X vision mixer and reviewed on Sony 4K monitors.  The signals are then stored as 4K XAVC files on a Sony PWS-4400 server, using latest PWA-RCT1 software.  In parallel with the main 4K signal, a separate Full HD / Rec.709 feed is also recorded for other distribution purposes.

“The color, detail and dynamic range captured by the F55 really make a difference in the revealing environment of a cinema,” said Brian Clark, commercial & technical projects director at NEP Visions, providers of all technical facilities for the project. “We’re taking a lot of care to ensure that the signal we’re capturing measures up to NT Live’s very high standards. The National Theatre’s product is unique, and a complex project like this demands a lot more than showing up with some cameras. It’s about carefully refining a workflow that’s sympathetic with the aims of the producer and creative team.”

“The NT’s priority is achieving a cinematic aesthetic,” said David O'Carroll, head of technology at Presteigne Broadcast Hire that is supporting NT Live and NEP Visions on The Beaux’ Stratagem. This extends to the choice of latest-generation hybrid camera lenses from Canon and Fujifilm that are teamed with each F55. “This gives the best of both worlds. The optical quality of the glassware and the aesthetic of the image are what you’d expect from a high-end movie camera. But here we also get the extra flexibility and creative control of zoom, focus and iris that you’d typically associate with conventional live production workflows.”

DBW are also supporting NT Live and NEP Visions using Sony PWS-4400 servers dedicated to the storage of all video signals. “We are very excited to take part in another innovative production,” said Stefano Rebechi, CEO of DBW Communication.

The task of producing a 4K Digital Cinema Package for playback across Vue’s 84-site estate is the responsibility of Soho Digital Cinema. “We want to preserve as much detail as possible,” said SDC’s David Margolis. “We’ve ended up with a beautifully mastered DCP, and I think everyone’s impressed with the final results that are remarkably faithful to the original footage.”

The production of The Beaux’ Stratagem follows on from Behind the Beautiful Forevers – the first production covered by a three-way initiative between Sony Digital Cinema 4K, NT Live and Vue Entertainment that was recorded in March and screened exclusively to Vue customers in Sony 4K.

“Working closely with all our partners, we’re continuing to expand the boundaries of event cinema,” said David McIntosh, vice president, Sony Digital Cinema 4K Solutions for Europe and the Americas. “With this production of The Beaux’ Stratagem we’re demonstrating once again that ultimate picture quality isn’t just about counting pixels, color and dynamic range play an equally important part in the total viewing experience – and our 4K projectors are simply the best way to experience that for yourself.”

“As the fifth largest cinema group in the world we are committed to remaining at the forefront of technological innovation and giving the best big screen entertainment experience,” said Kevin Styles, managing director (UK & Ireland) of Vue Entertainment.